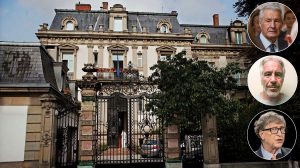 Thorbjørn Jagland, Freemason and former Prime Minister of Norway from 1996 to 1997, and President of the Norwegian Parliament (Stortinget) from 2005 to 2009, organized a secret meeting with Jeffrey Epstein and Bill Gates in 2013, while serving as the Secretary-General of the Council of Europe. Four years earlier, Thorbjørn Jagland, who was also the former chairman of the Norwegian Nobel Committee, was responsible for giving president Barack Obama the controversial 2009 Nobel Peace Prize.

Deceased convicted pedophile Jeffrey Epstein, who attended the meeting in question with Bill Gates in 2013, was apparently instrumental in establishing connections between Gates and the International Peace Institute (IPI), a think tank involved in the production of vaccines, according to a recently published investigative report by DN Magasinet (commonly referred to as DN),  that is one of Norway’s leading newspapers.

As DN pointed out, the strange meeting that took place in March 2013, happened several years after the late Jeffrey Epstein had been condemned and pleaded guilty to charges of soliciting a prostitute with a minor, as well as paying compensation to many women. Nevertheless, the Secretary-General of the Council of Europe welcomed Epstein to his official residence in Strasbourg. It was Bill Gates who asked for the meeting with Thorbjørn Jagland, saying that he was interested in the Council of Europe’s work in the medical sector. According to Jagland, Gates and Epstein arrived together with the delegation.

The International Peace Institute that officially specializes in multilateral approaches to peace and security issues, works closely with the Secretariat and members of the United Nations, and had Jeffrey Epstein’s associate, Ghislaine Maxwell, speak at several events held at their headquarters, as the founder of her “oceanic conservation group.”  The International Peace Institute is based next to the headquarters of the United Nations, who they work closely with.

The President of the International Peace Institute since January 2005, Norwegian Freemason Terje Rød-Larse, who is a close friend and collaborator of Thorbjørn Jagland,declined to respond to DN about this story that links several important institutions with the infamous Jeffrey Epstein and Ghislaine Maxwell, who, of course, helped out with the P.R.