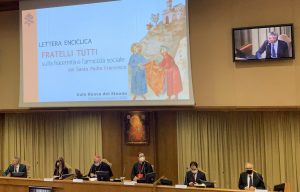 In the longest encyclical to date, signed in Assisi on the October 3rd, 2020, Pope Francis talks about migration, markets, media, interfaith dialogue, populism, nationalism, redistribution of wealth, and the death penalty in what looks like a typical Communist manifesto where he even puts into discussion private ownership. I announced in previous articles that this new document would become another milestone in the construction of the One World Religion.

For this reason, the Jesuit Pope cited in his new encyclical “Human Fraternity” the Masonic covenant,also known as the Abu Dhabi declaration, that he made last year with the Grand Imam Ahmed al-Tayyeb.  He named this controversial antisemitic Sunni leader five times in his new encyclical Fratelli Tutti (“Brothers All”), and even quoted the Qur’an in the encyclicalaffirming: “Whoever kills a person is like one who kills the whole of humanity, and whoever saves a person is like one who saves the whole of humanity” (cf. Surah 5:32).

The quite lengthy 43,000-word document was released on Sunday after the official signing the day before, and it mentions as inspiration for the universal fraternity, three well-known Freemasons who were not Catholics: Martin Luther King, Desmond Tutu, Mahatma Gandhi. 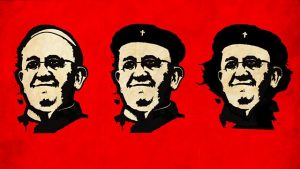 However, Pope Francis uses St. Francis as a cover-up for this Masonic/Jesuit project reminding the readers of the encyclical that the words “Fratelli Tutti” are taken from the sixth of 28 admonitions of St. Francis of Assisi to his brother friars, focusing on the 25th admonition to love and fear one’s brother that reads: “As much when he is far from him as he would when with him.” Pope Francis also used St. Francis of Assisi’s famous visit to Sultan Malik-el-Kamil in Egypt during the fifth crusade (1219), to promote his “fraternal openness” with Islam. But the truth is that the Jesuit Pope is clearly promoting a Masonic vision of the upcoming One World Religion when he writes that he has “the vision of a fraternal society.”