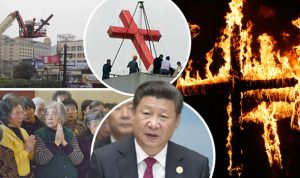 Guangzhou, the capital of China’s Guangdong Province, is offering to pay citizens in exchange for information on “illegal religious groups” as the Communist Party of China continues to crack down on all forms of religious activity.  This includes the remains of the “underground” Catholic Church, not aligned with the recent deals made between the Jesuits and China.

Groups that are not officially registered with the Chinese Communist Party, are now subject to severe persecution, including the detention and forced Communist indoctrination of members and leaders, the destruction of shrines and church buildings, and, in the case of Muslim ethnic minorities in western China, indoctrination and forced-labor internment camps.

As the Associated Press reported, the website of the Guangzhou Department of Ethnic and Religious Affairs states it is now offering up to 10,000 Chinese yuan, roughly $15,000, for information on the activities of “underground” Catholic Churchs and other religious groups, that could eventually lead to the arrest of key leaders. The Sinicization of religion has been pushed by President Xi Jinping, who took power in 2013 and who has strengthened government oversight of religious activities.

In the last few weeks, disturbing reports of the destruction or desecration of Evangelical Churches, “underground” Catholic churches and shrines throughout China. Under President Xi Jinping, the clearly Satanic Chinese government has destroyed churches or removed their steeples and crosses as part of a campaign that reflects the Communist Party’s longstanding fear that Christianity, viewed as a Western philosophy, is a threat to the party’s authority, demonstrating once again the Satanic Nature of Communism.

In December of last year, the Golden Lampstand Church in the Shanxi Province was destroyed by paramilitary police officers,  and is the perfect example of what the Chi-coms Satanists are capable of doing. Remember, Communism is Satanism in disguise and much more than a mere political system.

A growing number of Catholics are deeply disturbed that the Vatican has forged such an alliance with China’s repressive regime,  that is persecuting “Underground” Catholics, but Pope Francis and the Jesuits don’t care.