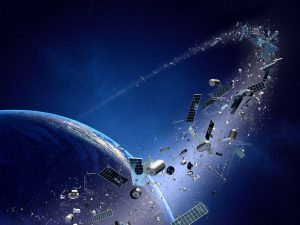 The anti-satellite missile test known as “Mission Shakti,” created a field of debris about 185 miles above Earth. India stupidly launched a missile towards space a week ago that struck an Earth-orbiting satellite and destroyed the spacecraft. NASA Administrator Jim Bridenstine told employees on Monday that it posed an “unacceptable”threat to astronauts on board the ISS. He stated that the satellite shattered into pieces and many are large enough to pose a danger to the space station, but not large enough to track. It is unclear how many pieces of debris were created.

Initially, Indian Prime Minister Narendra Modi made a televised address shortly after the launch on Wednesday to declare the anti-satellite, or ASAT test a success. He praised the maneuver, called “Mission Shakti,” as “an unprecedented achievement” that registers India as “a space power.”

Prime Minister Modi also clarified that the satellite was one of India’s own, according to Reuters. He said during a broadcast “Our scientists shot down a live satellite. They achieved it in just three minutes,”adding,“Until now, only U.S., Russia, and China could claim the title. India is the fourth country to achieve this feat.”

Unfortunately, these idiots from India might have screwed things up for good.  “That kind of activity is not compatible with the future of human spaceflight,”said the NASA Administrator who then added, “That is a terrible, terrible thing to create an event that sends debris at an apogee that goes above the International Space Station.”