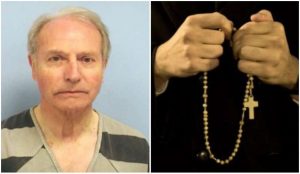 A Roman Catholic priest has been arrested in Austin, Texas, on a misdemeanor assault charge after he was accused of groping a woman in home hospice care during her last rites. Rev. Gerold Langsch, was later arrested on Thursday and charged with assault by contact stemming from the encounter that happened last October. The 75-year-old priest is free on a $15,000 bond, and if convicted, could be sentenced to a year in jail and fined up to $4,000. I personally think that’s not enough for such a disgusting crime that targeted this woman at her most vulnerable moment.

The woman was in hospice care for severe complications from diabetes when Lansch went to her home to administer the sacrament of anointing the sick, a sacrament of absolution given to Catholics before death or in the proximity of it. The woman survived the terrible ordeal, and recounted how Langsch first anointed her chest with holy water, then began to apply the lotion, massaging one of her breasts, pinching a nipple and asking,“Does that feel good?”

The sick and perverted Catholic priest then tried to slip his hand inside her diaper but was unable to. The woman later told police the priest’s actions left her in shock, uncomfortable, confused, and feeling like a, “nasty, dirty piece of meat.” Police were contacted five days after the terrible incident but an arrest wasn’t made until early March due to the woman’s health. This month she was able to identify the priest in a classic lineup helping the officers to finally arrest this monster priest.

In a statement that followed the arrest, the Catholic Diocese of Austin said Langsch was a pastor of St. Paul Catholic Church in Austin until last month when the diocese “received an unrelated report that he had failed to maintain proper boundaries with an adult.” The official statement seems to omit the involvement of any physical contact, but he was deemed no longer able to serve as a priest in the diocese of Austin and removed him from his post. The diocese later stated that they will cooperate fully with police and asks anyone with information about the priest’s actions to notify authorities.