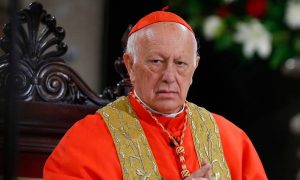 Cardinal Ricardo Ezzati Andrello, in charge of crisis management and sexual abuse cover-up of the Church in Chile, which began during the pontificate of Pope Ratzinger, has finally ended. His resignation as Archbishop of Santiago was officially accepted by Pope Francis on Saturday.

The powerful Cardinal Ezzati who is facing accusations of cover-up of several abusive priests in Chile, has left Santiago and can now retire and spend the rest of his days in a luxury resort paid by the Vatican and not in prison like Cardinal Pell. His resignation is the result of the current crisis of the Church in Chile, where in recent years a growing number of cases of clergy sexual abuse and cover-up has ultimately ruined the reputation of the Catholic Church he was trying to protect.

Cardinal Ezzati, who is an old friend of Pope Francis, is now facing the civil justice system, accused of allegedly covering up sexual abuse by the former Chancellor of the Archdiocese of Santiago, Fr. Oscar Muñoz Toledo. At a press conference following the resignation acceptance, Cardinal Ezzati said that the crisis in the Church in Chile,“Without a doubt has been the greatest sorrow of this time.”

He also tried to justify himself by saying that the archdiocese has fully cooperated with the civil justice system, “we had open doors,” and, “prosecutor had requisitioned the documents he wanted” in the different raids carried out by the Chilean police authorities. This is only partially true, as the police had to carry out various raids.

In the eyes of Pope Francis, Ezzati gained standing to become a Cardinal. He specialized in crisis management by being apostolic visitator of the infamous Legionaries of Christ, an Order with a strong presence in Chile, whose leader, the late Marcial Maciel Degollado (1920-2008), was a pedophile and a Satanist working for the New World Order at the highest levels, including the Bush family. After his death the seal of silence and fear that was weighing on many Legionaries was broken, and the Vatican needed someone like Cardinal Ezzati to control the Legionaries, especially in Chile.

As Archbishop of Santiago, Ezzati inherited the oversight on the case of Father Fernando Karadima accused of the sexual abuse of minors in Chile, which became public in 2010, raising questions about the responsibility and complicity of several Chilean bishops, including some of the country’s highest-ranking Catholic prelates. By 2018, this case attracted worldwide attention as a critical failure of Pope Francis and the Church and pushed the whole Chilean Church to address the sexual abuse of minors in an unprecedented manner. Catholic bishops in Chile even handed the Pope their resignations, something I reported last year on leozagami.com:

Cardinal Ezzati ultimately said in his recent press conference: “For now I am availing myself of my right to remain silent which Chilean legislation offers me. I will speak at the appropriate time. My lawyer knows the day and the hour to speak.”

When Ezzati’s resignation was accepted, Pope Francis appointed Bishop Celestino Aós Braco of Copiapó as Apostolic Administrator in Santiago but this resignation seems to have angered the Pope who is onboard a sinking ship.