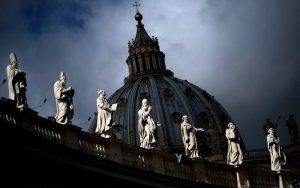 The storm created by the sex abuse scandals raised by the Viganò report are having very concrete repercussions on the finances of the Holy See. US Catholic entrepreneurs are suspending their donations after the recent pedophilia crisis may possibly bankrupt many dioceses in the US in the near future. Legatus, an association of businessmen created in 1987 by Thomas Monaghan, the founder of the Domino’s Pizza chain, has just frozen in an “escrow” fund, the annual donations of its affiliates rather than sending them to Rome as in the past. The group’s tithe to the Holy See this year would have been about $820,000, according to the Wall Street Journal.

“We certainly pledge our continued devotion to the Holy Mother Church and recognize the tithe has been an important commitment of Legatus since our founding,”a September 6th letter to Legatusmembers from Chairman and CEO Thomas Monaghan, stated.  “However, in light of recent revelations and questions, we believe it appropriate to respectfully request clarification regarding the specific use of these funds.”

This is a very serious problem for the Vatican and the Jesuits as Legatusis an influential organization of Catholic business leaders with more than 80 chapters throughout the United States and Canada usually very loyal to the Church.

Jorge Bergoglio, the first Jesuit to actually become Pope, may end up as the last Jesuit to ever become Pope, in light of the havoc that he and his Order are inflicting upon the Church every day. He is fueling the College of Cardinals with liberal appointees in the hopes that they will elect a modernist Jesuit clone in the next conclave but things are not working out as expected and rebellion is growing within.

Today’s Pope Francis is the result of the work of the liberal policies promoted back in the days of Fr. Pedro Arrupe SJ and his loyal servant Fr Vincent O’Keefe SJ.  Both have been dead for a long time, but their legacy is still felt in the Church today. Arrupe is sometimes considered the second founder of the Jesuits after Ignatius Loyola, and in July, the new Jesuit Superior General Arturo Sosa, S.J., suggested that: “We have formally begun the process of beatification for Father Pedro Arrupe.”  So a truly inspiring figure for the Jesuits and the Jesuit Pope.

No wonder Arrupe said it was important to“understand well and appreciate the reasons that make it (Marxism) attractive. Christians readily and rightly sympathize with the aim and ideal of liberating mankind from domination and oppression.”

“In regards to Marxists themselves,”Arrupe said, “we should remain fraternally open to dialogue with them.”  Rejecting anti-Communism, he also stated, “We should also firmly oppose the efforts of anyone who wishes to take advantage of our reservations about Marxist analysis in order to condemn as Marxist or Communist, or at least to minimize esteem for a commitment to justice and the cause of the poor, the defense of their rights against those who exploit them.”

“Have we not often seen forms of anti-Communism that are nothing but a means for concealing injustice?” he asked.  Even in public he did not rule out possible collaboration with Marxists, but said such collaboration must be activities “acceptable to a Christian.”

O’Keefe was an old friend of ex-Cardinal McCarrick, who studied at Fordham University, where Vincent O’Keefe was president. The two promoted what was known at the time as “nouvelle theologie” a mix of left-wing ideology and shared religious ideals. Fordham is the third-oldest university in New York and the only Jesuit University in New York City. O’Keefe became the 2nd in charge to the venerable Fr. Pedro Arrupe, the legendary Superior General of the Jesuits from 1965 to 1983.  In 1981, he became the Vicar General of the entire order and was by most accounts slated to become the 29th Superior General and the first U.S. citizen to reach that pinnacle but something happened that delayed the rise of the Jesuits in the Vatican.

In 1981, the late Pope John Paul II,  a reactionary Polish anti-Communist who didn’t like Marxism, suspended the normal governance of the Jesuit order, fearing their plan to destroy what was left of the doctrine of the Church after the Second Vatican Council, and imposed his own delegate to run it, effectively ending O’Keefe’s tenure in Rome. At the time, it was not known if the Pope would, for the second time in history, suppress the Jesuits altogether.

Pope John Paul II’s predecessor to Papa Luciani, who died mysteriously in 1978, after just 33 days in office, was apparently preparing for such a move and some say this was one of the reasons for what many regard as his murder.

Arrupe reoriented the vast ministries of the Jesuits toward working for a more politicly incisive institution that would participate in the geopolitical games of today, and O’Keefe was his trusted collaborator. They are responsible for the rise of the left-wing radicals who are destroying the Church with the help of the first Jesuit Pope.

One thought to “Pedo Sex Scandals thrusts the US Church in economic turmoil!”