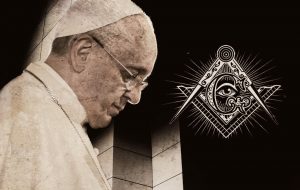 While the Vatican friendly media continue their attack about the allegedly inaccurate memories of the former nuncio who asked the Jesuit Pope to resign, Francis was interviewed by the director of the Italian newspaper, Sole 24Ore,on money, Europe, and migration. The extensive interview appeared on the pages of the daily newspaper on Friday, the 7th of September 2018. For the Pope, “Europe needs hope and a future. Openness, driven by the wind of hope”.

But what kind of future can we expect from a Muslim invasion? With the rife security issues experienced across Europe due to mass Muslim migration, a poll conducted earlier this year across 28 nations in the European Union (EU),  revealed that 78 percent of EU citizens see the influx as a problem and desire tighter control of Europe’s external borders, but the Pope still seems to ignore this, and insists that, “a peaceful future does not exist if not in solidarity.”

So what about solidarity for the many victims of his clergy pedophile network?

A letter recently made public by the Catholic News Service, that was sent in 2006 from a top official from the Vatican Secretariat of State, acknowledged allegations made by a New York priest back in 2000, concerning the then Archbishop Theodore McCarrick.

Fr Boniface Ramsey, now pastor of St Joseph’s Church in Yorkville, New York City, was once on the faculty of the seminary where ex-Cardinal Theodore McCarrick groomed and sexually molested young seminarians. Fr Ramsey, who had been on the faculty of the seminary from 1986 to 1996, was shocked by the situation, and sent a letter in 2000 reporting McCarrick to Archbishop Montalvo, who wasat the time Vatican nuncio to the United States, informing him of the many complaints he heard from seminarians, located in South Orange, New Jersey.

Another letter made available by Fr Boniface Ramsey to the Catholic News Service dated October 11, 2006, sent from Archbishop Leonardo Sandri, the former Vatican substitute for general affairs,  confirms that the Vatican knew about Ramsey’s letter that was sent 6 years earlier, and the sexual abuse going on in the seminary but did absolutely nothing to stop them.

Archbishop Leonardo Sandri wrote to Fr Ramsey, “I ask with particular reference to the serious matters involving some of the students of the Immaculate Conception Seminary, which in November 2000 you were good enough to bring confidentially to the attention of the then Apostolic Nuncio in the United States, the late Archbishop Gabriel Montalvo.”

Fr Ramsey also said he assumed the reason the letter from Archbishop Sandri, who is now a Cardinal and Prefect of the Congregation for Eastern Churches, only mentioned “serious matters involving” seminarians and not Archbishop McCarrick’s behavior was because accusations against the former Cardinal were “too sensitive.” However, “My letter on November 22, 2000, was about McCarrick and it wasn’t accusing seminarians of anything; it was accusing McCarrick.”

Archbishop Leonardo Sandri  has been the Prefect of the Congregation for the Oriental Churches since June 2007 and a cardinal since November of that year.

His accusations were ignored and Fr Ramsey said he never received a formal response to the letter he sent in 2000, but he was certain the letter was received because of the letter he received later from Archbishop Sandri, in 2006, acknowledging the allegations he had raised against ex-Cardinal McCarrick. This letter from Sandri basically confirms that both Pope Francis and his predecessors, Pope Benedict XVI and Pope John Paul II, have been covering up the sordid affairs of ex-Cardinal McCarrick for a very long time, and it clearly shows elements that appear in the controversial 11-page document written by Archbishop Carlo Maria Viganò, who served as nuncio to the United States from 2011 to 2016, and has now been delegitimized by the Pope’s fake news network.

This letter demonstrates the cover-up and the dishonesty of Antipope Francis, who continues to destroy the Church in support of his liberal policies, ignoring the real problems of his perverted clergy. Several former seminarians have claimed that the now ex-Cardinal McCarrick would invite groups of them to a beach house, and McCarrick insisted that individual members of the group always share a bed with him, but this was not a problem for Pope Bergoglio, Pope Ratzinger or Pope Wojtyła, who has even been made a Saint.

This demonstrates once again that the Second Vatican Council, informally known as Vatican II, was the beginning of the end for the Catholic Church that was taken over by liberal Freemasonry and deviant Illuminati sects, that use the Vatican’s unparalleled ability to influence more than a billion people to manipulate humanity.

A Pope supported by Freemasonry all over the world