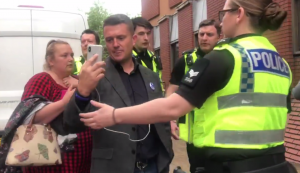 On May 24th,  Pope Francis stated that equating Islam to terrorism is “foolish,”in an interview published by L’Eco di Bergamo, the same day the body of Pope Saint John XXIII ( a Liberal Freemason!) returned to his northern Italian home city. Francis said in the interview, “It might be coming out of many people’s mouths, but this equation is a lie and it is foolish,”adding,  “The most important role [of religions] is that of promoting a culture of encounter, together in the promotion of true education for responsible behavior that takes care of creation.”

Well, I am sure that,”Responsible behavior that takes care of creation,” does not include pedophilia permitted in the Qur’an, and practiced by Prophet Muhammad and his companions.

Umar, who  was the 2nd caliph of Islam, married Umm Kulthum when she was 10- 12 years old. Some sources even say that she was only five years old when Umar married her, and Muhammad himself  was engaged to his future wife,  Aisha when she was only 6 years old and he was 51, and consumated the marriage while she was still pre-pubescent.

Muhammad was indeed a pedophile, even according to the most stringent clinical definition of pedophilia – the DSM-IV-TR:

For this reason, many Muslims today continue to commit this terrible crime in the West, following their prophet’s example, often undisturbed and even supported by the Western Liberal Establishment, headed today by Pope Francis. 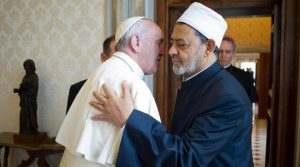 In the early morning of 25.05.2018, English Defence League’s Tommy Robinson, an outspoken critic of such practices in the UK, who had already been arrested exactly one year ago for trying to video a group of Muslim pedophiles outside of a a court case in Canterbury, was arrested once again for live-streaming on Facebook the ongoings of a trial of Muslim child rapists in Leeds Crown Court.

Robinson has been accused of  breaching the peace outside the court room during the grooming trial of one of these Islamic gangs that are increasingly targeting white women and  girls in England with drink and drugs, before raping and sexually abusing them.  However, the exposure of this case by Tommy Robinson  was reason enough for the  UK police to silence him by intimidation and a truly unlawful arrest. The EDL founder was sentenced in an incredibly short amount of time, to 13 months in a UK prison, due to his suspended sentence being activated.

Robinson later asked his friend, during the arrest, to get him a solicitor because he is ‘on a suspended sentence’ Another officer asked him to “turn off his live feed” that was ga thering growing attention.

“I’m inciting people. How have I incited people? This is free speech; this is where we’re at. You’re not even allowed to.

“This is ridiculous. Lads, do you feel right about what you’re doing here? I haven’t said a word.

“In fact, someone laid a hand on me and assaulted me outside court. Other people swore at me and threatened me about my mother and here I am being arrested for saying nothing.

Britain’s Tommy Robinson, wrongly labeled as a bigot for his courageous stance against radical Islam, was actually threatened live on camera while in front of the court, without any of Her Majesty’s police present to intervene, might die in prison because of  this Orwelian State, completely in bed with the Islamic pedophiles, supported by a Jesuit Pope and a Liberal Queen whose grandson just married a Communist who is openly a critic of Donald J. Trump.