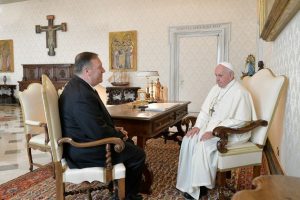 On September 22, 2018, the Vatican signed a historic agreement with the Chinese government concerning the appointment of bishops in China.The infamous agreement by the Vatican Jesuits with Communist China was scheduled for renewal tomorrow, but maybe not, after Pompeo threatened the Vatican two days ago.

On September 19, the U.S. Secretary of State Mike Pompeo gave what can only be described as an ultimatum to Pope Francis and his infamous Jesuits in an unprecedented tweet that relaunched the content of a recent article in the prestigious magazine “First Things.”

Pompeo said in his historic Twitter message: “Two years ago, the Holy See reached an agreement with the Chinese Communist Party, hoping to help China’s Catholics. Yet the CCP’s abuse of the faithful has only gotten worse. The Vatican endangers its moral authority, should it renew the deal.”

Two years ago, the Holy See reached an agreement with the Chinese Communist Party, hoping to help China's Catholics. Yet the CCP’s abuse of the faithful has only gotten worse. The Vatican endangers its moral authority, should it renew the deal. https://t.co/fl0TEnYxKS

Finally, Mike Pompeo, on behalf of President Donald J. Trump, is challenging the corrupt moral authority of the Vatican Jesuits that have been conspiring with China since Bergoglio was elected Pope, receiving in the process millions of dollars from the Chinese Communist Party to stay silent about their numerous crimes that include, among other things, the persecution of Christians, as I wrote about at leozagami.com:

“No regime represses faith on a larger scale than the Chinese Communist Party.” Mike Pompeo said in another Tweet, published in the article by “First Things,” and that there is a lack of moral authority in the Vatican if they side with Communist China: “The human rights situation in China has deteriorated severely under the autocratic rule of Xi Jinping, especially for religious believers. Credible reports have exposed the Chinese Communist Party’s program of forced sterilizations and abortions of Muslims in Xinjiang, its abuse of Catholic priests and laypeople, and its assault on Protestant house churches—all of which are parts of a “Sinicization” campaign to subordinate God to the Party while promoting Xi himself as an ultramundane deity. Now more than ever, the Chinese people need the Vatican’s moral witness and authority in support of China’s religious believers.Vatican diplomats are meeting this month with their CCP counterparts to negotiate the renewal of a two-year-old provisional agreement between the Holy See and China. The terms of that pact have never been publicly disclosed; but the Church’s hope was that it would improve the condition of Catholics in China by reaching agreement with the Chinese regime on the appointment of bishops, the traditional stewards of the faith in local communities.”

The U.S. Secretary of State also said what we at leozagami.com have been warning you about from the very beginning of this unholy ordeal: “The Sino-Vatican agreement has not shielded Catholics from the Party’s depredations, to say nothing of the Party’s horrific treatment of Christians, Tibetan Buddhists, Falun Gong devotees, and other religious believers. The State Department’s 2019 annual report on religious freedom provides an illustrative example in the story of Father Paul Zhang Guangjun, who was beaten and “disappeared” for refusing to join the CCP-run Patriotic Catholic Association. Sadly, his experience is not unique. Communist authorities continue to shutter churches, spy on and harass the faithful, and insist that the Party is the ultimate authority in religious affairs.”

And, Pompeo also notes, “As part of the 2018 agreement, the Vatican legitimized Chinese priests and bishops whose loyalties remain unclear, confusing Chinese Catholics who had always trusted the Church. Many refuse to worship in state-sanctioned places of worship, for fear that by revealing themselves as faithful Catholics they will suffer the same abuses that they witness other believers suffer at the hands of the Chinese authorities’ increasingly aggressive atheism.”

It seems the words of Cardinal Joseph Zen, from Hong Kong, who served as the sixth bishop of Hong Kong are finally being heard.

As well as the lies of the Jesuits…

On September 29th-30th Pompeo will be in Rome for various institutional meetings including the infamous “Spygate” affair that connects the Obama administration with Italy, and there is also an interview in the Vatican with Pope Francis to clearly stop him from renewing the agreement with China on the appointment of bishops.  This time Pope Francis and his criminal gang have been warned in advance, Pompeo is not going home with another useless blessing and more lies by the Jesuit Marxist Pope.