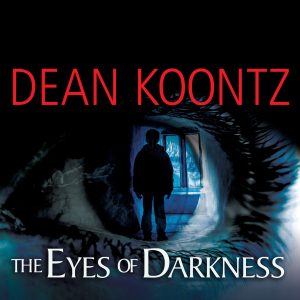 I spent the last few hours studying The Eyes of Darkness,a prophetic thriller originally published in 1981 about a deadly bacteriological weapon called from the revised edition of 1996  “Wuhan-400” and  named this way because it was developed at the RDNA labs outside of the city of Wuhan. Older versions of the book refer to the disease as “Gorki–400.” The book in question was written by the best selling American writer Dean Koontz, and was originally published under the pseudonym Leigh Nichols.

The book focuses on a mother who sets out on a quest to find out if her son Danny died one year ago, or if he was still alive. Many of Dean Koontz’s books have appeared on The New York TimesBest Seller list and have been adapted for television or the big screen, but not this one. According to Koontz in the afterword of a 2008 paperback reissue, television producer Lee Rich purchased the rights for this book along with others and The Eyes of Darknesswas assigned for a possible tv adaptation with the female writing team of Ann Powell and Rose Schacht, co-writers of Drug Wars: The Camarena Story, but for some mysterious reason they could never deliver an acceptable script.

In this fictional account, the protagonist, Christina Evans, the mother of Danny, will eventually find her child kept alive in a military facility after being accidentally contaminated with man-made micro-organisms created at the research center in Wuhan. Secretly researched in a U.S. military laboratory for “Biological and chemical recombinant DNA experiments”to try and reproduce the dangerous virus after “a Chinese scientist named Li Chen defected to the United States, carrying a diskette record of China’s most important and dangerous: new biological weapon in a decade.”

So the origins of this fictional virus denominated “Wuhan-400” are connected with genetic engineering, which is the science of manipulating genetic material from an organism. The first artificial genetic modification was accomplished in the U.S. by Herbert Boyer and Stanley Cohen in 1972, but the Chinese got involved from the beginning in this growing industry that created the first genetically engineered plant as well as infamous Genetically Modified food. The virus in question is described by Dr. Carlton Dombey, one of the doctors in charge at the military laboratory described in the book, in the following way to the mother of Danny and Elliot Stryker, her partner who once worked for Army Intelligence: “Wuhan-400 is a perfect weapon. It afflicts only human beings. No other living creature can carry it. And like syphilis, Wuhan-400 can’t survive outside a living human body for longer than a minute, which means it can’t permanently contaminate objects or entire places the way anthrax and other virulent microorganisms can. And when the host expires, the Wuhan-400 within him perishes a short while later, as soon as the temperature of the corpse drops below eighty-six degrees Fahrenheit. Do you see the advantage of all this?”

Elliot Stryker replies: “If I understand you, the Chinese could use Wuhan-400 to wipe out a city or a country, and then there wouldn’t be any need for them to conduct a tricky and expensive decontamination before they moved in and took over the conquered territory.”

Dr. Carlton Dombey adds: “And Wuhan-400 has other, equally important advantages over most biological agents. For one thing, you can become an infectious carrier only four hours after coming into contact with the virus. That’s an incredibly short incubation period. Once infected, no one lives more than twenty-four hours. Most die in twelve. It’s worse than the Ebola virus in Africa—infinitely worse. Wuhan-400’s kill-rate is one hundred percent. No one is supposed to survive. The Chinese tested it on God knows how many political prisoners. They were never able to find an antibody or an antibiotic that was effective against it. The virus migrates to the brain stem, and there it begins secreting a toxin that literally eats away brain tissue like battery acid dissolving cheesecloth. It destroys the part of the brain that controls all of the body’s automatic functions. The victim simply ceases to have a pulse, functioning organs, or any urge to breathe.”

When Eliot questions the doctor saying,  “I thought the U.S. got out of the chemical and biological weapons race a long time ago.”  His answer is also rather chilling: “For the public record, we did, It made the politicians look good. But in reality, the work goes on. It has to. This is the only facility of its kind we have. The Chinese have three like it. The Russians . . . they’re now supposed to be our new friends, but they keep developing bacteriological weapons, new and more virulent strains of viruses.”

Now, we would all like to know how Dean Koontz, the world’s sixth-most highly paid author, who ties with John Grisham, at $25 million annually, knew of Wuhan and even named the deadly bacteriological weapon “Wuhan-400,” 40 years ago?  We would like to have a chat with him about his “prophetic visions”on what seems to have striking similarities with the nVoC-2019 Coronavirus.

We now all know that the Coronavirus pandemic was not, as some early reports claimed, the product of a Wuhan seafood market, where people were allegedly eating infected bats, but instead a Chinese biological weapon that had escaped from the Wuhan Institute of Virology,  and one lab, in particular, that seems to match the description of the RDNA labs in Dean Koontz’s fictional book.  Koontz, who obviously has contacts with U.S. military intelligence must have known in the early 80s that the Chinese were working on this kind of thing.

Arkansas Senator Tom Cotton echoed his concerns, tweeting that “China claimed—for almost two months—that coronavirus had originated in a Wuhan seafood market. That is not the case. @TheLancet  published a study demonstrating that of the original 40 cases, 14 of them had no contact with the seafood market, including Patient Zero.” But he was immediately slammed by Chinese Ambassador to the U.S., Cui Tiankai.

After reading, The Eyes of Darkness, I am now 100% convinced of China’s wrongdoing in letting this dangerous man-made virus start this new pandemic, so let’s call it “Wuhan-400” and not nVoC-2019 Coronavirus because is a bacteriological weapon not a random product of nature!