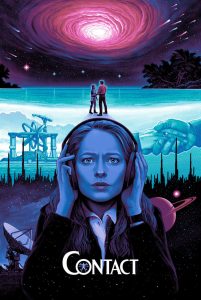 A new study by an international team of scientists led by astronomers at the Canadian Hydrogen Intensity Mapping Experiment, Fast Radio Burst Project (CHIME/FRB) in British Columbia has discovered that a mystery radio source in a galaxy some 500 million -years from our solar system is sending out fast radio bursts like clockwork in 16.35-day cycles, including 1-2 bursts per hour over a four day period with 12 days of silence before starting up again.

The mystery signal, known as FRB 180916.J0158+65, was first discovered in 2017 and has continued repeating steadily, albeit at a rate some 600 times fainter than the first bright flare. In their study, scientists analyzed 28 bursts that took place between September 2018 and October 2019, confirming the pattern, and excitedly concluding  “This is the first detected periodicity of any kind in an FRB source.”

Something is going on behind the scenes in what seems like a scene reminiscent of the 1997 movie, “Contact” by Robert Zemeckis, the film adaptation of Carl Sagan’s 1985 novel by the same name.

In the meantime, yesterday on the 12th of February 2020 in the Church of Saint Anne, where almost every year since 2002 there have been conferences dedicated to UFOs and related matters, the Italian expert Vladimiro Bibolotti, President of C.U.N., the Italian National Center for the study of UFOs delivered a talk to an audience full of Jesuits considered the scientists of the Church, about possible encounters with other civilizations. 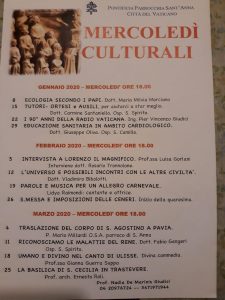 Information from various sources has led ufologists and scholars in recent years to conclude that the Vatican is very aware of said encounters with aliens and the presence of UFOs on our planet, and in what appears as an unprecedented move from March 2nd of this year, the Vatican will finally allow researchers from different countries to have access to informationpertaining to Pius XII pontificate (1939-1958) to end a long-standing debate on his real role during the Holocaust-era that seems to be of interest for ufologists.

It was the successive Pope John XXIII who allegedly had an alien encounter in the summer of 1961 two years before his death. This amazing encounter was disclosed years later in the 1980s by the Pope’s personal secretary, the late Loris Francesco Capovilla, who witnessed the incident and kept it secret following the Pope’s wishes for over two decades until it was revealed in a British newspaper.

One evening in July 1961 at the summer residence of the Pope in Castelgandolfo near Rome, the Pope, and his secretary were taking a walk through the property’s gardens. Around 10 pm they noticed a bright star. The supposed star started to descend and after a few minutes, they realized that it was some type of craft. The UFO had a round shape and carried blue and amber lights.  The brightness of the lights was such that it seemed to have turned into daylight.

When the UFO was close enough it stopped and remained steady in the air. A ray of yellow light appeared from below the craft. The light gave the sensation of a tube of light, that stopped a meter or two from the ground without reflecting on the ground.

From the tube of light a humanoid being emerged. The alien had a golden-white halo around it. It was taller than the average human and had large pointed ears. It lifted its arm to salute the Pope and his secretary. Thinking that they were witnessing a divine vision they fell on their knees and started to pray. After a few moments, they lifted their heads but the alien being was still standing a few meters away from them. Without saying anything Pope John XXIII stood up and walked towards the alien. Loris stayed silent on his knees observing the Pope and the alien having a conversation.

There is no information on what they talked about. From the information available we know that although Loris could hear the Pope’s voice the conversation was telepathic. After communicating for about 20 minutes the alien turned and left. The craft took off in complete silence.

It is not a secret that the Vatican has one of the biggest historical archives in the world, with around 150,000 documents, so ufologist are very excited about the possibility of having even a partial access to it but they should remind themselves that the Vatican is not going to disclose significant secrets about the UFO phenomenon for the moment. Of course, things might change if the scientists confirm the alien origin of the radio signal from outer space that repeats at regular intervals every 16 days.