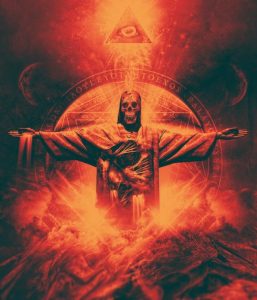 Joseph Roth wrote in his novel, The Antichrist in 1934, during the time of totalitarianism:

“The Antichrist has come; clothed in such a way that we, who have become accustomed to waiting for him for years, do not recognize him. He already dwells in our midst, within ourselves. And the heavy burden of his ignoble wings weighs upon us. […] For a long time he has been spreading poison in the innocent souls of our children. But we do not notice!”

These words from Roth are cited by Vaticanist Antonio Socci when he commented on the recent Vatican controversy regarding the two popes that speaks of the Antichrist as being an icy poison that infects everyone, corrupting souls and even language itself, that has lost contact with reality and confuses black and white, and true and false.

German-Jew Hannah Arendt (1906–1975), one of the most influential political philosophers of the twentieth-century wrote: “The ideal subject of the totalitarian regime, is not the convinced Nazi or the convinced Communist, but the man for whom the distinction between fact and fiction, true and false, no longer exists.”

Today we find ourselves in this same situation. Pope Francis has used his latest interview with his Italian-Communist journalist friend, Eugenio Scalfari, to de-escalate media furor over the book on priestly celibacy published by Pope Emeritus Benedict XVI and Cardinal Robert Sarah where Benedict opposed Francis’s possible ordination of married priests in the Amazon and other outlying regions. The matter is considered closed, the pontiff told Scalfari, founder of La Repubblica, in a three-page interview that sounds more like an ultimate piece of Jesuit well-crafted propaganda than an honest opinion, while Joseph Ratzinger remains a hostage of the Jesuits.

In the light of current events in the world and the Catholic Church, I would like to resurrect an especially thought-provoking 2007 article by LifeSite’s John-Henry Westen entitled, Pope’s retreat preacher speaks on Antichrist as a ‘pacifist, ecologist and ecumenist. The article in question is still available online and was widely quoted at the time, for good reason.

In 2007, the climate change hysteria, now headed by aspiring-Antichrist Greta Thunberg, and the general collapse of moral consensus was not as present in governments, educational institutions, and society, that is now trashing capitalism, and urging the younger generations to embrace a Marxist-sounding new international economic order. They support opening borders to millions of undocumented, poorly vetted Islamist immigrants with their radically different culture and religion-based laws that are in opposition with the western way of life, often proclaiming that, “The most serious of the evils that afflict the world these days are youth unemployment and the loneliness of the old.”

This is complete rubbish promoted by figures like Pope Francis, who has been inviting increasingly virulent, prominent New World Order enemies of Christianity, such as Paul Ehrlich and Professor John Bongaarts, the Vice-President of the Population Council, and China’s “organ czar,” to speak at Vatican conferences and advise the Church on policies. A worldly, modern “social justice” list of priorities dominates the left-wing dominated Vatican  statements of today that are a dramatic change from the more spiritual and moral prior papacies.  Creating this list of priorities are the same liberal evil forces that are trying to disrupt American-Judaism, using Liberal Sabbatean-Frankist  Jews against their religion.

Two of the Jewish community’s most celebrated writers, Michael Chabon and his wife, Ayelet Waldman, wrote an open letter almost two years ago, stating that:

“Any Jew, anywhere, who does not act to oppose President Donald Trump and his administration acts in favor of anti-Semitism; any Jew who does not condemn the president, directly and by name, for his racism, white supremacism, intolerance, and Jew-hatred, condones all of those things.”

This sick and dangerous ideology culminated a few years earlier in the election and administration of former-President Barack Obama, who was hailed by some as the “Tikkun Olam President”and (synonymously) as the “First Jewish President.” He repeatedly referenced the significance of Tikkun Olamin his own life, nurtured by his liberal Jewish mentors in Chicago, but it was because of his commitment to Tikkun Olam, not in spite of it, that he was considered the most hostile president in the history of the U.S towards Israel and one of the closest to the LGBTQ community. After all, the objective of his mission and the mission of most libtards is to destroy traditional Judaism as well as Christianity.

Quarterback Drew Brees came under brutal attack recently for having the audacity to appear in a video encouraging Christian students to bring Bibles to school. The pretext for the attack was that he supported a project by Focus on the Family, a Christian organization that believes in the Bible, to include the biblical concept of marriage and sexuality. Note that Brees did not say or do anything that could be even remotely construed as being anti-LGBT. He had previously appeared in anti-bullying ads supporting that community. In his critics’ view, arguing against bullying LGBT members is good, but so is bullying Christians and traditionalist Jews. However, a new generation of traditionalist Jews, proud of their heritage and jealous to preserve it, is unimpressed with America’s broken Judaism and the Demoncrats. These Jews know that their ancestors did not live to worship a political party of atheists nor die for faddish causes.

They recognize that the American-Jewish future depends on overcoming the superficial and ignorant equation of Judaism that leftist politics is trying to undermine regardless if Jewish or Christian. The only religion they seem to respect and fear is Islam, but that’s a big mistake on their side, especially from the LGBTQ community. How can they ignore how homosexuals are treated in countries that impose Sharia law? For these ideal candidates of dictatorial regimes,Hannah Arendt wrote: “the distinction between fact and fiction, true and false, no longer exists.”

We can call the Age of Liberals, the age of lies and the Antichrist, after all, the devil is so good at lying that many of God’s glorious angels did not detect his deceit nor understand his manipulative schemes. When people in positions of trust and respect promote his lies as truth, they especially honor Satan, who is always after your soul.

One thought to “The Age of the Liberal Antichrist”