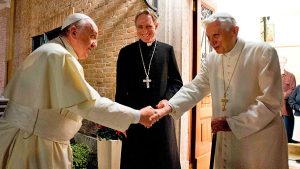 “The pope emeritus is becoming an antipope the moment he starts writing, not so much against the Pope’s position, but against that of the bishops of the Amazon.”

This harsh criticism was made during a recent interview with Radio Radicaleby the famous Italian Jurist, Francesco Margiotta Broglio,who helped amend the Lateran Treaty with the Holy See in 1984, and is still considered one of the biggest experts in the world on the system of laws and legal principles that are made and enforced by the hierarchical authorities of the Catholic church known as Canon Law.

Professor Broglio, who is currently Professor Emeritus of Canon Law,  andwas the head of the Joint Commission for the implementation of the provisions contained in the original Italo-Vatican Agreement of 1929 known as the Lateran pacts. He has sent shock waves with his statement on the controversy surrounding Ratzinger and the removal of his name in a book written with Cardinal Sarah on the defense of celibacy.

So what is an antipope?  An antipope (Latin: antipapa) is a person who, in opposition to the lawful pope, makes a significant attempt to occupy the position of Bishop of Rome and leader of the Catholic church. During the 3rd and mid-15th centuries, antipopes were supported by important factions within the church itself, and by secular rulers, and it because of this it was difficult to distinguish which of the two claimants should be called pope and which antipope, as in the case of Pope Leo VIII and Pope Benedict V. Persons who merely claim to be pope but have few followers, such as the modern sedevacantist antipopes, that are not classified as historical antipopes, but with Pope Ratzinger, the situation is indeed very different.

During the interview, Professor Broglio criticized the choice of letting two popes coexist next two each other in the Vatican, especially when they have two different, and at times opposing positions in regards to the management of the church and the Catholic Faith. As I wrote yesterday, Pope Ratzinger was forced by the Jesuits and a furious Pope, to remove his name from the book.  This was confirmed by the well-respected Italian journalist and author Antonio Socci, an early critic of Pope Francis and an expert on the Fatima messages that were published in 2018 a book with an undeniably provocative title: The Secret of Benedict XVI: Why He Is Still Pope.  In the book in question, Socci advances about the totally “unprecedented and mysterious” situation of a Pope Emeritus living within the Vatican while his successor rules from the throne of St. Peter.”

While Socci confirmed from his sources yesterday that Pope Francis was furious with Pope Ratzinger for involving himself with Cardinal Sarah’s project, my own Vatican sources said that the Jesuits delivered a full-on death threat to Pope Benedict XVI through his close aide Georg Gänswein, who is not only an Archbishop since 2012, but also a professor of Canon Law at the Pontifical University of the Holy Cross.