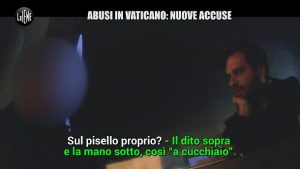 Two years ago, an Italian team of investigative journalists from the TV show Le Iene exposed for the first time a sordid tale of sex abuse involving minors from St. Peter’s choir serving as altar boys for the Pope. The abuse took place in the pre-seminary San Pio X, the only place inside the Vatican walls where minors are allowed to live.

I first talked about this incredible story in the following article published back in November 2017:

BREAKING NEWS on the collapse of the Vatican!

However, after the show was aired, Le Iene said they immediately received a letter from the diocese of Como warning them against proceeding with their investigation. Fortunately, Le Iene was not intimidated by the threat, and went forward investigating the matter. They have now returned to Italian TV with more witnesses and new shocking revelations about the sex abuse of minors as young as 11 in the Vatican by three different priests.  Details of the sex abuse encounters include how the predator priests forced themselves on the innocent victims over and over again threatening them if they refused to give them oral sex or if they refused to let their genitals be touched.

As I reported a couple of months ago, the scandal eventually forced the Pope to partially take action in September 2019:

The abuse took place only 200 meters from Saint Peter’s Basilica and at times even inside the Basilica during the Pope’s masses. The new report from Le Iene is being aired this evening on Sunday, the 17th of November 2019, by Berlusconi’s TV channel Italia1.

LINK TO THE ORIGINAL REPORT BY LE IENE: