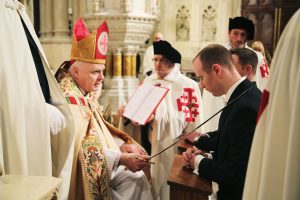 The feast of the Patroness of the Order of the Holy Sepulchre, the Blessed Virgin Mary Queen of Palestine, is celebrated throughout the Order’s lieutenancies today on October 25th.  Ahead of the occasion, Holy See Secretary of State Cardinal Pietro Parolin granted a rare interview to the Communications Service of the Order of the Holy Sepulchre a few days ago, sharing some interesting info on this influential and powerful order that is part of the Illuminati network and saw amongst its members the late Licio Gelli of the P2 lodge.

The Equestrian Order of the Holy Sepulchre and the Sovereign Military Order of Malta are the two chivalric orders recognized by the Holy See. In the first one, the Pope appoints the Grandmaster, while in the second he is confirmed.  There are currently 30,000 Knights and Dames worldwide who are active within their local churches and are strongly united with the bishops of the territory, who often act as Grand Priors of the Order’s Lieutenancies that control the influential members that usually come from the upper echelons of society and are present even in the otherwise “Orthodox” Russian Federation where they are led by a controversial gay bishop. Nowadays, most members of the Equestrian Order of the Holy Sepulchre act as Jesuit agents and can’t be trusted, even if some of them have been close to the more traditionalist values of the Catholic church in the past they have been completely taken over by the liberal agenda of  the Jesuits in the last 30 years.

Cardinal Parolin described the present work of the Order in the following way, focusing on their primary role in the Holy Land:

It could be said in all truth that the members of the Equestrian Order of the Holy Sepulchre, both the Knights and the Dames, are like “ambassadors” of the Holy Land. In fact, in addition to living their own Christian faith and manifesting adherence to the Catholic Church in the environments in which they live and work – in which sense all the baptized are called to be “ambassadors of Christ” (see 2 Cor 5:20) – they promote initiatives in favour of the Holy Places in the parishes and in the dioceses they belong to. Moreover, through their presence they also raise awareness among the faithful to meet the needs of the Christians who live in the Holy Land, often in difficult, if not dramatic, conditions. Today, the most pressing task is to create the political and socio-economic conditions that favour the permanence of Christians in the Holy Land, because it is in the interest of the whole Church that the Land of Jesus does not become a museum of archaeological finds and precious stones, but continue to be a Church built with “living stones” (1 Pt 2:5), Christians who for two thousand years have continued the uninterrupted tradition of the presence of Christ’s disciples. Therefore, members of the Equestrian Order of the Holy Sepulchre are asked not only to promote the collection of funds for the ecclesial realities present in the Holy Land, but also to pray and work so that peace prevails over divisions and violence.

Last year, Cardinal Edwin O’Brien, Grandmaster of the Equestrian Order of the Holy Sepulchre of Jerusalem, advised 90 new knights and ladies that being a member of the papal order requires sacrifice, prayer, pilgrimage, and charity. However, Cardinal O’Brien is one of the U.S. prelates who grossly underreported sexual abuse and pedophilia within their (arch)dioceses to the National Review Board.

The controversial New Yorker, who is a former auxiliary bishop of the archdiocese, served as principal celebrant and homilist at the annual Investiture and Promotion Mass of the Equestrian Order of the Holy Sepulchre of Jerusalem that took place last year on September 29, 2018 at St. Patrick’s Cathedral.  A highlight of the event was when the newly invested knights and ladies approached the steps of the altar and, after being greeted by Cardinal O’Brien, bowed. As the Cardinal held a ceremonial sword and motioned with the blade, he tapped the knights’ shoulders with the sign of the cross.

O’Brien is no saint and was also reported for having failed to remove the infamous Father John “Matt” Lee from ministry when he was informed in a letter dated May 6, 2002 that Lee was involved in an ongoing homosexual relationship. When Lee was later arrested in 2007 and convicted of aggravated assault, sodomy, conduct unbecoming an officer, and failure to disclose to sex partners that he was HIV positive, Cardinal O’Brien the Grandmaster of the Equestrian Order of the Holy Sepulchre of Jerusalem lied by implying he had no knowledge of Lee’s predator problems. While Lee only served a two-year sentence, he was later arrested in 2014 and is currently serving a 30-year sentence in a Delaware State Prison (Department of Justice).

The Order of today is unfortunately represented by people like Cardinal O’Brien, and has nothing to do with the original Equestrian Order of the Holy Sepulchre of Jerusalem that dates back to the 11th century and the first Crusades led by Godfrey de Bouillon, a legendary Christian knight who plays a central role in the establishment of Christian knighthoods and is considered important in the more mysterious and secretive Priory of Sion and in the Masonic Strict Templar Observance. Because he had been the first ruler in Jerusalem, Godfrey of Bouillon was idealized in later accounts and has always been depicted as the ultimate leader of the crusades, the King of Jerusalem, and the legislator who laid down the assizes of Jerusalem, and for this reason he has been included among the ideal knights known as the Nine Worthies.

From that point onwards in history courageous individuals were granted knighthoods from the church for their actions in battle in defense of Christianity at the Church of the Holy Sepulchre on the hill of the Calvary in Jerusalem. The knights of the Equestrian Order of the Holy Sepulchre of Jerusalem were fighting once upon a time for Christianity, while today under the control of the Communist Jesuits they are fighting against it.  It is sad to see how this powerful knighthood has turned against their Christian principles embracing in their folds even Islamists and members of the LGBTQ community. It should come as no surprise that the worldwide headquarters of the Equestrian Order of the Holy Sepulchre is on the other side of the road from the Jesuit headquarters at Borgo Santo Spirito where the Black Pope resides.