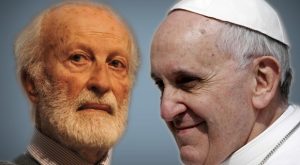 On the 4th of April 2018, I wrote an article in regards to the controversy regarding the Pope’s words about the non-existence of hell:

“Avvenire, the Italian daily newspaper which is affiliated with the Roman Catholic Church, published a very odd article on the 3rd of April 2018, by top Catholic journalist Father Mauro Leonardi, in defense of the friendship between Eugenio Scalfari and Jorge Mario Bergoglio. The Vatican media does not change the words of Bergoglio on the non-existence of hell, but rather confirms them, as well as the close friendship with Scalfari, going as far as stating that “True friendship means finding common ground not proselytism” and at times being condescending, stating “If Scalfari believes the Pope does not believe in hell let him believe it”.

Two days earlier, on April 2, 2018, I wrote another article on leozagami.com:

“To save the Pope from this growing crisis that is affecting the identity of the Church, even Repubblica, one of Italy’s leading newspapers, founded by the same Eugenio Scalfari, ran an article today, Monday the 2nd of April 2018, by Piergiorgio Odifreddi, stating that everything Scalfari wrote about the Pope, should be dismissed, and can be simply considered Fake News. A final blow to the credibility of Scalfari, who will probably never interview the Pope again and be blacklisted, after a long career as a Marxist propagandist and a servant of the elite.”

Now the same journalist who let us know that Pope Francis said hell doesn’t exist, Eugenio Scalfari, was allowed once again to filter another controversial statement from Pope Francis about Christ’s divinity.The Vatican, of course, had to immediately deny it to avoid backlash and on Wednesday October 9, Matteo Bruni, the director of the Holy See’s press office, said in a statement: “As already stated on other occasions, the words that Dr Eugenio Scalfari attributes in quotation marks to the Holy Father during talks with him cannot be considered a faithful account of what was actually said but represent a personal and free interpretation of what he heard, as appears completely evident from what is written today regarding the divinity of Jesus Christ.”

However in an article for  La Repubblica, Pope Francis’ longtime Atheist-Communist friend and interviewer, Eugenio Scalfari, claims that the Pope told him that once Jesus Christ became incarnate, he was a man, a “man of exceptional virtues” but, “not at all a God.” Of course, this goes against the present teaching of the Catholic Church and most Christian churches that obviously say that Jesus Christ, the Son of God, was incarnated as a man and a God.  For the Muslims, Jesus was a regular man and not the son of God, even if they do revere him as a Holy Prophet. The Adoptionist Gnostics, as well as the Adoptionists, have also a similar idea, but for the Adoptionists, Jesus was the adopted Son of God after receiving baptism as the divine Christ the moment in which he began his ministry.  This means that Pope Francis’ revelations to his trusted scribe Eugenio Scalfari have been made in preparation for the return of a Muslim Jesus and the unification of Christianity and Islam. Muslims believe, in fact, that Jesus (called “Isa”in Arabic) is a prophet of God, born to a virgin (Mary), and will be the one to return to Earth before the Day of Judgment to restore justice and to defeat al-Masih ad-Dajjal (“the false messiah”), also known as the Antichrist and not Mohammed.

So Muslims do not believe that Jesus is the son of God just like their ally Pope Francis and this is not a coincidence but a willingness to destroy the Divinity of Christ in preparation of a false Messiah. Remember, this critically important distinction between Muslim and Christian views of Jesus seems to be at the basis of Pope Francis’s deliberate heresy.

Maybe the Pope should dwell on Matthew 16:13 when Jesus questioned His disciples by saying: “Who do people say I am?”