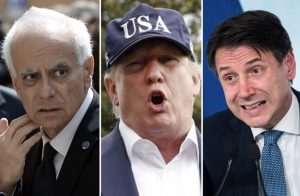 A special summit was held between Italian 007’s and the Central Intelligence Agency this morning, and this unusual event was reported by the Italian news agency AdnKronos, which specified that it was held in the headquarters in Rome of the Dipartimento delle Informazioni per la Sicurezza (DIS, “Department of Information Security”), a department of the Presidency of the Council of Ministers of Italy, instituted in 2007 as part of the reform of the Italian security services currently headed by left-leaning General Gennaro Vecchione, another Jesuit agent working for Pope Francis.

The department is divided into several functional areas. The Central Security Office (Ufficio Centrale per la Sicurezza) where the meeting allegedly took place, and deals specifically with administrative protection of state secrets, including the granting or withdrawal of security clearance to individuals and organizations. This very sensitive summit took place mid-morning Italian time and saw the participation of what was described by the Italian news agency as the C.I.A. Chief of Station (COS), but it could have included the participation of the present Director of the Agency. The event officially addressed, “various operational issues”but  there was much more on the table after Attorney General William Barr and U.S. Attorney John Durham met in Rome with intelligence officials last week to reportedly discuss the still missing Joseph Mifsud and the roots of the Russian Hoax that started in 2016 to clear Hillary Clinton and frame President-elect Donald J. Trump.  The mysterious Misfud, who is one of the key figures of the infamous Mueller Report/Witchhunt is said to be in Rome protected by the Vatican and Italian Intelligence to avoid further exposure of the Russian “collusion” hoax that will inevitably bring into disrepute not only Special Counsel Robert Mueller’s investigation, but also Italy’s past governments and even the current Italian President Sergio Mattarella, who has willingly participated in an act of sabotage against the President of the United States.

This morning’s meeting with the Central Intelligence Agency was attended by various key members of the Italian Intelligence community, namely General Luciano Carta for Aise, formerly known as SISMI, which is the foreign intelligence service of Italy, and Prefect Mario Parente for Aisi, formerly known as SISDE, the domestic intelligence agency of Italy, and, of course, the director of DIS, the above-mentioned Gennaro Vecchione, who is also regarded as the most trusted adviser of the current Italian Prime Minister, Giuseppe Conte, who is now feeling pressure after the U.S. Attorney General, William Barr and John Durham left Italy empty-handed and disappointed with the Italian authorities and the intelligence officials they met in Rome to trace the origins of the FBI’s investigation into Russia’s alleged collusion in Donald Trump’s 2016 presidential election campaign.

News of their disappointment even reached the corrupt Italian media, which in the meantime was busy criticizing the fact that Prime Minister Giuseppe Conte had authorized the U.S. investigation on Italian soil in the first place. Trump administration should be aware of this and they should not trust General Gennaro Vecchione’s investigation on their behalf,as this guy is not on our side and should be considered untrustworthy by U.S. intelligence. 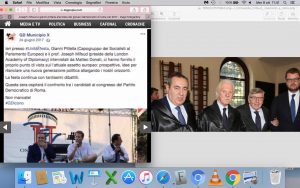 Officially during this morning’s meeting, the Russiagate theme was not touched, but rather, other issues planned for some time, including the next visit of the Italian President Sergio Mattarella to the United States that will take place between the 15 and the 20th of October 2019.

The entire meeting was based on the fact that the Italians and the Vatican are still protecting Professor Joseph Mifsud and sources close to U.S. President Donald J, Trump, reported by Italian media, Dagospia, said  he is very annoyed with the current situation and is demanding answers on this whole affair directly from President Sergio Mattarella, but let’s all remember that Mattarella is another Catho-Communist enemy of the United States working on behalf of Pope Francis, who dislikes President Donald J. Trump and would like to see him out of office.

President Trump should not trust the Italian authorities who are colluding with Nancy Pelosi, the Italian mob, and the Vatican to see him impeached and out of office.