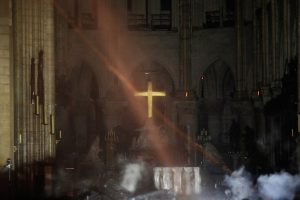 It was shocking to see Notre Dame – “Our Lady” – on fire right in the beginning of the two week Beltane “Fire” Festival, an ancient Iron Age Celtic ritual and the largest of its kind, celebrated by occultists and witches worldwide. It ends between April 30th  and May 1st, the day the Illuminati Order was originally founded by Adam Weishaupt in 1776. Special bonfires are kindled for this event, and their flames, smoke, and ashes are deemed to have protective powers. Could Macron be using such protective powers to help his presidency in crisis? The dreadful sight of Notre Dame Cathedral on fire on Monday, April 15th 2019 is also manifesting another Nostradamus prophecy.  Even his name is in some way connected to the name of the cathedral, Nostradamus is, in fact, the Latinized version of Michel de Notre dame, and a quatrain written 500 years ago by the legendary French figure apparently predicted this event in the most accurate way!

The following is the original quatrain made by Nostradamus both in French and English, with astrology clues which point directly to Monday April 15, 2019.

What is also astonishing is the use of the word “emotions,” by Nostradamus, which is the exact word used on Twitter by French President Emmanuel Macron to describe France’s response.

“Notre-Dame is engulfed with flames. Emotion of the whole nation. Thoughts are with Catholics and all the French. Like all citizens, I am sad to see this part of us burn.”

As you can see below, President Macron’s first name – Emmanuel – which also refers to God – appears in the second line of the quatrain. The following version of the quatrain in question comes from one of the most accurate recent books on the Prophecies of Nostradamus: the Millennium edition.

The head of Aries, Jupiter and Saturn,

God eternal, what changes can be expected?

France and Italy, what emotions will you undergo?

Nostradamus seems right on target with his prediction. When Notre Dame burns, the Catholic Church, the Vatican, and Italy are also affected. Let’s remember, the fire collapsed the Cathedral just weeks after Cardinal Pell, Australia’s most senior Catholic, was found guilty of sex abuse charges, and the Catholic Church seems increasingly compromised in the age of Pope Francis with new scandals unfolding day after day, aside from his continuous unconditional support for Islam. Interestingly enough, only three days ago, a Muslim fundamentalist called Ines Madani, 22,was jailed for encouraging would-be jihadists to go to Syria and participate in attacks against France and, in particular, Notre Dame. In the last couple of months, a dozen Catholic churches were desecrated across France over the period of one week in an egregious case of anti-Christian vandalism that is a reminder of the Satanic nature of these attacks.

French Roman-Catholic newspaper La Croix International reported how numerous attacks on churches took place across France in the past couple of months. Senseless acts included the desecration of altars, the defacing of Christ on the cross, and in an extreme case, human excrement  spread across the walls of a holy place of worship. Even Paris’s historic Saint-Sulpice church, which was used in the filming of Dan Brown’s, Da Vinci Code briefly caught fire. The churches dedicated to the Our Lady (Notre Dame), another name for the Virgin Mary,  seem particularly affected in France these days. Notre-Dame des Enfants (Our Lady of the Children) in Nimes was desecrated in early February, and according to local news reports, the vandals had drawn a cross on the wall with human excrement and damaged other religious items in the church. A few days later, on February 9, a similar attack occurred at the Church of Notre-Dame de Dijon, Côte-d’Or, about 175 miles south-east of Paris. The “long century” mentioned in the quatrain by Nostradamus is also really interesting because this is, of course, the Millennium and we are now in the year 2019.

Celebrity astrologer, Jessica Adams gives the following explanation of this quatrain on her blog:

What we have here is Chiron indeed at “the head of Aries”at just three degrees of the zodiac sign. The sun, burning orange at sunset in Paris as Notre Dame fell, is also in Aries, in this astrological chart set for Monday 15th April 2019 at 5.50pm, Paris, France. The shock of the moment is shown by Uranus at 2 Taurus, making an almost exact semi-sextile to Chiron. In fact, this is a line-up which could only happen once every 80 years. The Moon is at 3 Virgo, exactly quincunx Chiron.

So what is Chiron? Well, what Chiron means in astrology reveals the nature of our darkness better than almost any other sign in the zodiac. Chiron is one of the four asteroids in the birth chart, along with Ceres, Juno, and Pallas Athena. These asteroids encompass a nuanced and lesser-known section of natal charts, unveiling shades of our personality that many astrology enthusiasts would overlook, but they encompass more feminine, emotional, and nurturing aspects of humanity, the same reflected by the Blessed Mother Mary.

As the iconic cathedral of Notre Dame burned in Paris, a fire also engulfed al-Aqsa mosque in Jerusalem, as another ominous sign of our times. The fire broke out in the guard’s room outside the roof of the Marwani prayer room, Antar al-Hazmawi, a guard of the al-Aqsa mosque confirmed to The New Arab. The fire brigade of the Islamic Waqf department in Jerusalem managed to control the blaze, while the area is currently closed to examine the cause of the fire, which is currently unclear.

In the meantime in Paris, shortly after midnight yesterday, firefighters stated the main structure of Notre-Dame de Paris, the city’s cathedral, had been preserved from collapse.

Archbishop Michel Aupetit of Paris Tweeted: “As I speak, it seems that the towers of the facade of Notre-Dame are saved. The whole diocese prayed, and I joined the young people who were praying at Fontaine Saint-Michel. Let us remain united more than ever, in Hope.”

I have listed below, other significant April dates on which we should reflect in connection with the beginning of the two week Beltane “Fire” Festival, (not all in chronological order) as my old family friend William S. Burroughs once said: Remember, in the magical universe there are no accidents and there are no coincidences. Nothing happens, unless someone wills it to happen.

Massive wildfires erupt in Oklahoma and quickly grab the attention of the front page of  USA Today newspaper.

April 15th, 2013The Boston marathon bombing where 3 were killed and hundreds were injured, including 1 child.

April 18th, 2013There was an explosion at the Texas Waco Fertilizer Plant killing at least 5-15 and injuring hundreds. The plant was also 20 miles North of Waco, Texas.

Government troops, tanks, and other military equipment stormed the compound of David Koresh and his followers at Waco, Texas. The compound was set on fire and reports state that at least 25 Children died as a result.

April 19th, 1775 The battle of Lexington & Concord made the Revolutionary War inevitable; it was one of the bloodiest battles.

April 19th, 1995 The Oklahoma City Bombing resulted in the death of 19 Children.

April 19th, 1861 Battles broke out in Baltimore (Baal) and Maryland (Ma), which produced the first deaths by hostile actions in the American Civil War.

April 20th, 1914 The Ludlow Massacre was an attack on a tent colony of roughly 1,200 striking coal miners and their families by the Colorado National Guard and Colorado Fuel and Iron Company. Miners, their spouses, and multiple children were killed by gunfire or after being burned to death. The primary owner of the mine was John D. Rockefeller, Jr.

April 20th, 2010 A major explosion resulted in a raging fire on the Deepwater

Horizon offshore drilling rig operating in the Gulf of Mexico, near the coast of Louisiana. On “May Day Eve”, BP announced that it did not know the cause of the explosion and as a result, 11 people died.

April 20th, 1999 The Columbine massacre at Columbine High School, Colorado, where 12 students and 1 teacher were killed. Those numbers bring the total to 13 dead with 21 injured.

April 21, 2016 An explosion rocks a petrochemical plant in Mexico killing 13 people, similar to the April 18, 2013, explosion at a fertilizer plant in Texas

April 27th, 2015 Riots break out again in Baltimore (Baal), Maryland (Ma), over the police brutality and death of a young black man. These riots produced major fires and chaos in the city. Fires and chaos are both associated with the ‘Trickster’ and the lord of Chaos, Saturn.

President of the United States.

Adolf Hitler supposedly killed himself on April 30th at exactly 3:30pm. He was born on April 20th.

The Church of Satan was established.

The Bavarian Illuminati was spawned. Their ‘official goal’ was to infiltrate Freemasonry and all positions of government and power.

May 1st, 1915 The passenger ship called the Lusitania set sail from New York to Liverpool. The Americans had officially declared neutrality in the First World War and the Germans had taken out ads in New York Newspapers warning Americans to stay off of a ship that would be traveling into a war zone because it would be subjected to fire from German U-boats. The Lusitania was found to be more than a passenger ship, however, with the discovery of armaments that were shipped to Britain. This broke U.S. neutrality, and the deaths of several civilians, including one hundred children, brought about enough anger for the U.S. to enter into World War One.

George W. Bush gives the ‘Mission Accomplished’ speech on board the US Abraham Lincoln.

The announcement the United States had conducted an operation that killed Osama Bin Laden, although it was reported on several occasions that he had died years prior.

The ‘One World Trade Center’, or ‘Freedom Tower’, which replaced the Twin Towers (Masonic Pillars), was revealed in New York. Its architectural height is 1,776 feet, construction was started on April 26th, 2006, and it is the third tallest building in the world.

2 thoughts on “The two week Beltane “Fire” Festival kicks off with the Notre-Dame Cathedral and Nostradamus predicted it all!”