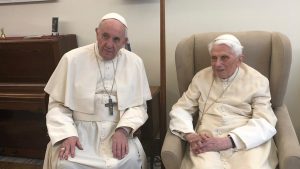 In the Vatican, the liberals have Pope Francis as their hero, but the conservatives have his predecessor, Benedict XVI. His very existence is said to provide encouragement to conservative critics who want to undermine the reign of the “False Prophet,” Bergoglio.  If Pope Francis is the living, reigning Pope, Benedict is his shadow, the undead Pope emeritus.

Strangely enough, yesterday, the day of the catastrophic fire that engulfed Notre Dame Cathedral in Paris, right at the beginning of Holy Week, Pope Francis made a special visit to the Mater EcclesiaeMonastery to offer Easter greetings to Ratzinger, the Pope emeritus, Benedict XVI, on the eve of his birthday. Today, the German Pope turned 92.

The visit was announced by an interim director of the Holy See Press Office, Alessandro Gisotti, who noted that the encounter offered Pope Francis the opportunity, “with particular affection,” to wish Benedict a happy birthday.

However, the faces of the two popes in the photo’s published by the Vatican press office are open to scrutiny as Bergoglio looks particularly tense next to Ratzinger. Pope Benedict, was, in fact, the last pope to visit Notre Dame Cathedral in September 2008.