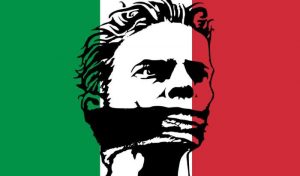 Rome, Sunday, March 31, 2019–My battle continues with an unfair case of defamation issued by an irregular Masonic Obedience connected to the Calabrese Mafia.  Articles 594 and 595 of the Italian Penal Code state that defamation can be a civil or criminal offense. The latter is punishable by imprisonment ranging between six months and three years. In contrast to the U.S., Italian courts shamelessly protect the nation’s public figures, national organizations, and institutions, even when they are proven wrong. They’re also not afraid to sentence journalists to prison, with laws that have not changed since the time of Mussolini’s dictatorship.

Only two weeks ago, the police raided an irregular Masonic lodge in Sicily connected to the same one that is suing me. Numerous local politicians, officials, and even police officers are connected to this lodge’s illegal activities, which include corruption, bribery, drug trafficking, embezzlement, and interfering with the work of the judicial system. The persecution of investigative journalists in this country is not only happening to me, but also to other colleagues from the Foreign Press.

(FAO) requested the closure of the print issue of the English-language newspaper that was reporting on the UN agencies in Italy.

The FAO is attempting to sue Phillips on a separate charge of criminal libel claiming that the two articles in question on the links between Graziano and the former Brazilian President, Ignacio Lula da Silva, were defamatory. The Investigating Magistrate recommended that the defamation charge be archived on the grounds that the articles were under fair comment in line with the right to report the news, and there was no defamation. Judge di Lauro disregarded the request and ordered that the Magistrate reconsider it, placing Phillips officially under investigation on the charge.

The case considered at the preliminary hearing is the second brought against Phillips by the FAO. In the first case, Graziano and four FAO executives claim they were defamed by articles published in the the Italian Insider. The first case will resume in May at the Rome Tribunal when the court will hear evidence from a defense witness called to counter the claims by the FAO. Reporters without Borders has condemned the judicial moves by the FAO against the Italian Insiderwebsite, saying that they are “disproportionate” and clearly aimed at forcing the closure of the newspaper, just as they are trying to silence me after making sure my books in Italy were taken out of commerce. An earlier attempt by the FAO to have the digital version of the newspaper closed, was rejected on the grounds that the Italian Court of Cassation ruled that news websites cannot be obscured, and and infringement of freedom of the press. However, the EU is moving forward to limit  freedom of speech online as I wrote in an article last week: