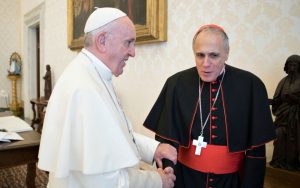 Yesterday morning investigators executed a search warrant on the chancery offices of the Archdiocese of Galveston-Houston, home of His Eminence Daniel Nicholas DiNardo, current Archbishop of Galveston-Houston, serving since 2006, and President of the United States Conference of Catholic Bishops.

DiNardo is basically Pope Francis’ main representative in the US and the most powerful American cardinal of the Catholic Church. A search warrant was obtained by the district attorney’s office for Montgomery County and was served yesterday morning by officers from the Texas Rangers and Conroe Police Department in search of what could be another pedophile cover-up orchestrated by the Catholic Church to protect their pedophile network.

The district attorney’s office stated on November 28, 2018, that it is seeking documents related to the case of Fr. Manuel La Rosa-Lopez, who was arrested by Conroe police back in September on four charges of indecency to children.  Two people have come forward, saying that Father Manuel La Rosa-Lopez sexually abused children while working at Sacred Heart Catholic Church in Conroe in the late 1990s to early 2000s.

Montgomery County prosecutor, Brett Ligon, obviously minimized the role of the Catholic Church in yesterdays’ press conference telling reporters that the Archdiocese had cooperated with the investigation, and that“This is not a shot at the Catholic church… this is an investigation into a Catholic priest.”  However, Ligon also invoked the Christmas season in his remarks sending a strong message to the pedophile Mafia from the State of Texas, “The patron saint of children is St. Nicholas…St. Nicholas is also known as Santa Claus. Well, Santa Claus is here to tell you, that the state of Texas will go to any length to protect children.”

The Archdiocese of Galveston-Houston released a statement Wednesday in response to the search.

“This morning, the District Attorney of Montgomery County executed a search warrant for records and information related to an ongoing investigation. The Archdiocese of Galveston-Houston continues to cooperate, as we have since the outset, with this process. In fact, consistent with Cardinal DiNardo’s pledge of full cooperation, the information being sought was already being compiled.”

Last week, DiNardo was the subject of a television report claiming he had knowingly left two priests in active ministry despite “credible accusations” of abuse made against them. Cardinal DiNardo denied that either case was “credible.”

DiNardo has found himself at the forefront of the  American hierarchy’s response to the sexual abuse crisis showing once again the hypocrisy of Pope Francis who is controlled by the pedophile mafia in the Vatican.