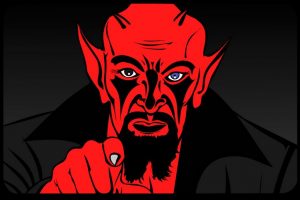 Michelle Remembers,was a book co-written in 1980, by Canadian psychiatrist Lawrence Pazder with his psychiatric patient (and future wife) Michelle Smith. It was the first book written on the subject of Satanic Ritual Abuse, and was considered a milestone in the decade of controversies that regarded Satanic Ritual Abuse as a “recovered” memory.

Written by a devote Catholic, it greatly influenced police, social workers, clergy, and the media, although it was later proven to be a complete fraud. It fueled mass hysteria that exploited the Satanic frenzy promoted by this book, diverting attention from actual Satanic ritual abuse of children that took place in the same period in the US Catholic Church.

When the first accusations against child care workers at the McMartin pre-school erupted in California in the mid 80’s, it was the American Martyrs Catholic Church that spearheaded and organized much of the hype and hysteria that overtook the whole region. This eventually led author Paul Eberle to write, “The Church was very accommodating with the lynch mob,” pointing out that most of the accusing parents were members of the American Martyrs Church. Apparently they were strongly urged by the Catholic Church itself to file charges—however absurd—against the clearly innocent child care workers. Meanwhile, pedophile Catholic priests secretly molested children all over the US, including Pennsylvania, creating the basis for the present crisis that lacks any easy solution.

In the end, Michelle Remembers,could not have done a better job in promoting an atmosphere of suspicion, fear, and finally, disbelief, concerning the very existence of secret Satanic covens, which was the whole point of this fake news operation. The Catholic Church managed to cleverly deflect the attention of the media from their own wrong doings across the US, instead blaming a supposed Satanic conspiracy they helped to create and promote.

In the meantime, the cult of Luciferian and Satanist priests who operate covertly in the Catholic Church with the protection of Catholic prelates, performed on their victims what the late Father Malachi Martin referred to as: “the culmination of the Fallen Angel’s rites”—i.e., the rape of male children. This can be clearly noticed in the horrific details of the Pennsylvania grand-jury report. In this diabolical scenario the child itself becomes a substitute for Christ for these perverts. The Satanic priest destroys the very innocence of his poor victim as an attack upon the innocence of Chris that he wants to destroy. In this sense, the male child victim becomes a proxy for the symbolic destruction of God—a Luciferian practice. Luciferian and Satanic priests are merely different sides of the same diabolical coin, with the Satanists practicing what is considered by the dark side of the Illuminati to be a somewhat higher form of Devil worship. The late Malachi Martin called this dark force within the Vatican today, Lucifer’s Lodge, referring to a small cabal within the Vatican that controls certain aspects of church policy, and has set guidelines allowing for wide-scale sexual abuse by Catholic clerics—a small number who are involved in Satanic ritual abuse. This faction is merely a component of a greater conspiracy that operates within and outside of the Roman Catholic Church with the ultimate goal of installing a One World Religion and a One World Government.

The average Catholic cleric who sexually abuses helpless victims is not an overt Satanist or a Luciferian in that they do not worship or mimic the Prince of this World. However, a very small number of priests do engage in real Satanic Ritual Abuse like as shown in the report of the Pennsylvania grand-jury, and have caused a huge amount of damage while enjoying the full backing of their respective bishops, who bend over backwards to enable them to continue ritually abusing innocent boys and women.

The policy of silence and cover–up promoted by the Vatican in the report is mind–boggling and consistent with previous investigations. Promoting offending clerics within the church hierarchy seems common practice typical of a sectarian hidden reality. The Pontifical Commission on Sexual Abuse led by Cardinal Sean O’Malley,who will not attend the World Meeting of Families, recently stated that: “Clergy alone will not make radical changes.”Interviewed by SIR (the Religious Information Service of the ECI) the German Jesuit Hans Zollner, also a member of the same commission and president of the Child Protection Centre of the Gregorian University, emphasises that, “In these days, people have been shaken by many stories of abuse, and many have publicly asked the Pope to say something, to do something”.

The vast amount of data the Vatican secretly collected in the last decades concerning the deviant sexual activity of its clergy makes it clear that the Pope and his Curia have always been well aware and informed of how widespread and common the sexual abuse problem is in the Church, and did nothing to address the situation, but continued with a policy of cover–up and silence because of the great power and influence of the Vatican Satanists . It seems that the only reason the Vatican ordered the secret sex studies was to get a global picture of where they stood, and to develop informed strategies for hiding the problem in the future, as they have always done, until now. Never was the welfare of the victims of sexual abuse taken into consideration, nor was the question of broken chastity vows apparently of any real concern, so why should the Letter to the People of God written by Pope Francis in apparent desperation, change anything?

On Saturday, the Vatican stated that the Pope will pray “in silence”in a chapel on the central altar of Saint Mary’s Pro-Cathedral in Dublin where a candle burns for “the victims of all abuses”.

For the Pope the show must go on.