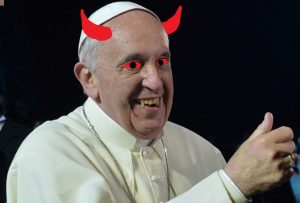 The Devil is lurking in the very heart of the Roman Catholic Church, warned the late Father Gabriele Amorth in 2010, at the time the Vatican’s chief exorcist. Today, the young American actor, author, and conservative political commentator, Michael J. Knowles, has in the following words, brilliantly synthesized the strong connection between Satanism and the Vatican in light of the recent Catholic sex abuse scandal in Pennsylvania:

Before his death in 2016, the Vatican’s chief exorcist for over a quarter century, Father Gabriele Amorth, observed, “The Devil resides in the Vatican, and you can see the consequences.” We are seeing the consequences now from Pennsylvania and Washington, D.C. all the way up to the College of Cardinals.

Fr. Amorth described: “Cardinals who do not believe in Jesus and bishops who are linked to the demon.”

The Pennsylvania grand jury report relates one instance of ritualized, Satanic abuse of a young boy by four priests. There is some ambiguity regarding the precise nature of the incident owing to page-long reductions in the report. Another priest rinsed out the mouth of a nine-year-old boy he had sodomized with holy water. Yet another priest sodomized yet another boy with a seven-inch-long crucifix.

We can imagine that the Antichrist’s kingdom would be the creation of a Satanic church, and the conversion of the world’s populace to a new Satanic religion, but from the shocking results of the recent investigation into the Catholic Church in Pennsylvania, we once again understandthat the elite of the New World Order doesn’t want everyone in the world to join Anton LaVey’s Church of Satan, or Lucien Greaves Satanic Temple. It makes much more sense in their eyes to infiltrate and exercise control from within a Church that is already in existence, like the Catholic Church for example, that has already solidified its power-base globally for centuries and secretly controls most Satanic sects. No church fits this description more perfectly than the Catholic Church, which was for centuries the most powerful force in the world, and in many ways still is in full control of the dominating elite of the New World Disorder, thanks to the Jesuits.

The Vatican has already spent billions of dollars dealing with pedophilia cases, this is no secret, and now they might even  be on the verge of bankruptcy in the US, after the latest scandals unveiled by the Pennsylvania grand jury, show decades of sexual abuse by priests and an extensive cover-up exercized by unscrupulous bishops. The Vatican broke its silence on Thursday and admitted the accusations were “criminal and morally reprehensible,” but this is only a farse.

Many of these children are obviously used in various Satanic rituals by the Catholic hierarchy, as it’s becoming more and more evident from the Pennsylvania grand jury report. The Vatican claims to be following the word of “God,” but as I have reported for years, the predominant practice of Satanism is a huge reality within the Church. The idea that there is Satanism in the Church hierarchy might seem far-fetched to those who still believe in fairytales or support the Jesuits. For decades the Satanic conspiracy has beeen plotting to infiltrate the Church with nobody to oppose them. In addition to those Satanists who join the Church as part of a liberal conspiracy to infiltrate and destroy its values, there are also those who originally join as devout Catholics, but for one reason or another, later become involved in Satanism and Pedophilia. They may have faltered in their faith at some point, or become fascinated with the occult or the deviant sexual practices of Aleister Crowley, and upon confessing this to a fellow priest in confessional, a priest with Satanic connections of course, may invite him to join one of the secret Illuminati cults that are operating within the Catholic priesthood, or close to it, like the Couleuvre Noire, the Ordo Templi Orientis, The Order of Nine Angles and many others.

As the late author and researcher, William H. Kennedy, who died in August 2013 under mysterious circumstances, wrote in his book Lucifer’s Lodge: Satanic Ritual Abuse in the Catholic Church:

“Satanism has always been a dark cloud lurking in the background of the Roman Catholic Church. That cloud is in the process right now of overshadowing the Church, of overwhelming it with its power and taking control. Meanwhile the Satanic apologists, including those who pose as spokesmen for the Church, are working overtime to convince everyone that there is no such thing as Satan, and most especially no Satanic conspiracy, urging us to ignore the sulfurous odor that lingers around the current Church child abuse charges.”

In the end, we have to admit that today, the real Satanist, the real hierarchy of Satan, can be found within the hierarchy of the Catholic Church, than in a counter-cultural organization like the Church of Satan or The Satanic Temple. Such groups have been built by the elite to promote a wide acceptance of Satanism in pop culture, but also to deviate the attention from the real Satanists who operate from the heart of the Vatican.

2 thoughts to “There are more Satanists in the Catholic Clergy than in the Church of Satan!”