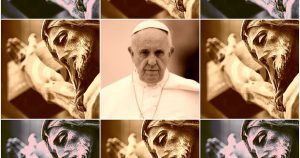 The papal election of Pope Bergoglio has been questioned several times, first by various books, and then by Cardinal Danneels, head of the St. Gallen Mafia, who suported and aided the election of the Jesuit Pope. There are plenty of heretical statements and actions from this Pope, whose episcopal lineage derives from Cardinal Rampolla, a Freemason, and a member of the Ordo Templi Orientis, as stated in official documents of the Order. 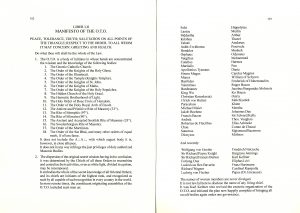 Nevertheless, what was discovered lately is even more shocking. The group of clerics dubbed the St. Gallen “mafia”, whose goal is to radically reform the Church to make it “much more modern”, was in close collaboration with the late exponents of the Swiss Ordo Templi Orientis, the oldest O.T.O. lodge worldwide, active since 1954, based in Stein, Appenzell, Switzerland, known as Die Abtei Thelema, operating as a lodge of the World Federation of Illuminati. This issue has been investigated in depth by Swiss author and researcher Peter R. Koenig, for his research project on the Ordo Templi Orientis Phenomenon:

The late Hermann Joseph Metzger OHO of the O.T.O., Patriarch of the Gnostic Catholic Church,  Head of his Order of the Illuminati, Head of his Fraternitas Rosicruciana Antiqua with some of his followers and their families

It confirms that between 1963–1967, the Swiss Ordo Templi Orientis used for their so called Gnostic Mass, a total of 3,000 Hosts obtained by the Thelemites (ie followers of Aleister Crowley’s Satanic religion), from a genuine Catholic convent.

The incense-grains were supplied by the Chief Sacristan of St. Gallen Cathedral, where the St. Gallen mafia met in secret to conspire for the takeover of the Catholic Church in the following years. The wine for the weekly Crowley Mass, came directly from the Catholic Bishop himself. Well, it’s no wonder the ecclesiastical arm of the Ordo Templi Orienti is called The Ecclesia Gnostica Catholica (E.G.C.). 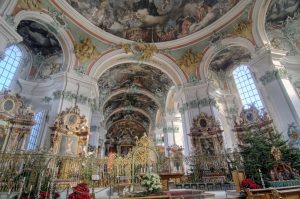 Inside the St. Gallen Cathedral

The Gnostic Catholic Church’s Crowleyan Masses continued until not so long ago, on alternate Sundays. The museum and library dedicated to the Illuminati remains active, as do Order operations in a minor way, as they have ceased publicly in April 2008, after the death of Fraeulein Aeschbach, who was the main financer of the Swiss O.T.O. However, the finances were merged with those of the Aeschbach-Stiftung, which is overseen by the cantonal authorities, and run by a Foundation Committee, headed by Ernst Graf and Adalbert Schmid: The latter looks after the library and estate business.

Video from the Masonic Museum of the Illuminati Order in Stein, a municipality in the district of Rheinfelden in the canton of Aargau, Switzerland

Besides being the new president of the Psychosophische Gesellschaft, Graf is also the vice-president. A financial cushion results from the sale of the Haus Schedlern, where Fraeulein Aeschbach lived; this also overcame any financial hurdles that might have thwarted the Society’s successful continuation. New members recluted within the Grand Lodge Alpina of Switzerland (SGLA) are taken on, but it seems they are not so active, as their main objective was reached in 2013, positioning a Jesuit Pope, whose episcopal lineage derives from a member of the O.T.O., to the throne of St. Peter.

Interestingly enough, the Pontifical Swiss Guards and their families have visited the Illuminati museum in growing numbers, since the end of 2013.