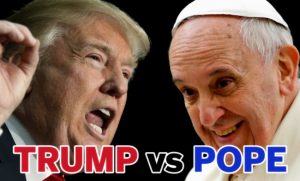 Finally, thanks to Donald J. Trump, and the US State Department, the war on pedophilia is becoming a reality even in the Vatican. The US State Department has in fact forced the Holy See to investigate a high ranking priest involved in the Diplomatic Corps back in Washington DC, creating what is quickly becoming another huge pedophilia scandal for Pope Francis and the Holy See.

According to Vatican inside sources of the newspaper IL FATTO QUOTIDIANO, the priest in question is monsignor Carlo Alberto Capella, a 50 years old from the city of Reggio Emilia, ordained in the Archdiocese of Milan in 1993, and involved in the Diplomatic Service of the Holy See since 2004.

Capella is particularly close to the Italian Democratic Party and the Clinton Foundation, and his name also figures among the officials of the delegation that signed with Pietro Carlo Padoan, the Italian Minister of Economic Affairs, the Convention between the Holy See and Italy on tax issues. We truly hope Donald J. Trump and the US State Department will continue to pressure the Vatican to have him defrocked and arrested, instead of the usual Vatican cover up.