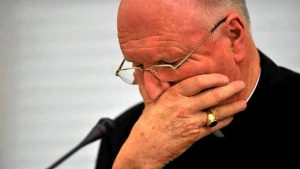 Back in June 2017, the office of Pell’s successor in Melbourne, Archbishop Denis Hart, released a statement saying he believes Pell is entitled to a fair trial stating that, “Cardinal Pell has been a friend and brother priest for more than 50 years.”

Now the shocking news: Archbishop Denis Hart announced that he is prepared to be jailed for failing to report child sex abuse if it is revealed to him during confession. Denis Hart has insisted that a confession is “a spiritual encounter with God through the priest” and was “of a higher order” than criminal law.

His shocking comments came after the Australian Royal Commission into Institutional Responses to Child Sexual Abuse rightfully said there should be, “No excuse, protection nor privilege,” for clergy who failed to alert police of abuse. However, Hart could be using this excuse to protect Cardinal George Pell, senior adviser to Pope Francis, and the third-ranking official in the Holy See, who is now facing trial in Australia.