The refugee invasion continues non stop in Italy, and patience is wearing thin for the Italians that seem to now want a Military Coup, after the ex-foreign Minister and Bilderberger, Emma Bonino, confirmed that Italy accepted this invasion willingly to protect the interest of the Italian Democratic government. The fact Italians are on the verge of civil unrest became particularly evident when the popular Italian website scenareconomici.it, proposed on the 4th of July 2017, in a public poll, three important questions, and in less than 24 hours, with a total of 4791, participants received the following results:

An incredible 71.1% equal to 3402 VOTES said yes to this dramatic solution.

The Italians want a military coup, to stop this refugee invasion, encouraged by Pope Francis and the EU, with the knowledge that the present Italian Government is not doing anything to protect their interest, and is also based on the consensus of a minority with a Prime minister named Paolo Gentiloni, who has not been elected by anyone.

So incredibly enough, the Italians of today are no longer the ones from the so called Dolce vita, and will definitely prefer a Military Coup, possibly without violence, to remedy the current disaster, void of any Government to defend the interests of Italy against this invasion, piloted by Soros and Hillary Clinton supporter Paolo Gentiloni. You can find more about this poll in the Italian Newpaper Libero or on Scenari Economici of Professor Antonio Maria Rinaldi. 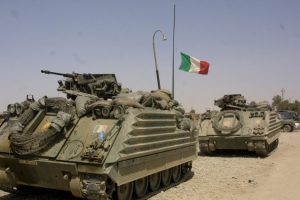