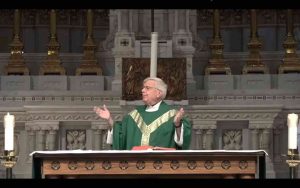 The Jesuits are moving forward in transforming the Roman Catholic Church into a platform for left-wing politics and racial hate. On August 31, 2020, known conservative political commentator Michelle Malkin stormed Twitter with outrage  over a Sunday Mass at the Jesuit-run Church of Saint Francis Xavier (“Xavier”) in New York City.

Malkin described the ordeal as a “revolting BLM prayer.”During the Mass, the congregation was invited to pray for racial equity and to agree to certain promises to promote racial justice. This insane  “pledge for racial justice” during mass happened in a Jesuit-led Roman Catholic parish in New York City , that openly declared that “white privilege and the culture of white supremacy must be dismantled.”

In the shocking video below, Rev. Kenneth Boller, S.J. of the Church of St. Francis Xavier, asks parishioners to recite the pledge after taking communion.

According to the church’s website, the pledge states the parish “joins with people throughout the world, in committing itself to racial justice,”asking parishioners to answer “yes”to the following questions:

DO YOU  SUPPORT justice, equity, and compassion in human relations.

DO YOU AFFIRM that white privilege and the culture of white supremacy must be dismantled wherever it is present?

DO YOU  SUPPORT racial equity, justice, and liberation for every person.

DO YOU AFFIRM the inherent worth and dignity of every person.

Therefore, from this day forward . . .

WILL YOU strive to understand more deeply the injustice and suffering white privilege and white supremacy cause?

WILL YOU COMMIT to help transform our church culture to one that is actively engaged in seeking racial justice and equity for everyone.

WILL YOU make a greater effort to treat all people with the same respect you expect to receive.

WILL YOU COMMIT to developing the courage to live your beliefs and values of racial justice and equality.

WILL YOU strive daily to eliminate racial prejudice from your thoughts and actions so that you can better promote the racial justice efforts of our church.

WILL YOU renew and honor this pledge daily, knowing that our church, our community, our nation, and our world will be better places because of my efforts.

The parish also conducts a workshop titled, “Dismantling Racism,”  intended “for white people to better understand white privilege.” The workshop is led by Kara Dansky, former senior counsel at the American Civil Liberties Union (ACLU) and a meditation instructor. In a statement sent to Breitbart, Boller wrote St. Francis Xavier “has striven to be inclusive and respectful of all people in a conscious and purposeful way:”

Over the years this has led to the establishment of the Xavier Mission with its outreach to feeding, clothing and sheltering the homeless, establishing a strong program of spiritual direction to help parishioners deepen their prayer life, providing a spiritual home to members of the LBGTQ+ community and many other initiatives. All these initiatives emanate from our commitment to putting Catholic social teaching into practice through works of charity and acts of peace and justice.

Boller also told Breitbart that the church has been “focused on the issue of racism”for the past two years. “After the death of George Floyd, the Church of St. Francis Xavier wished to be even more pro-actively anti-racist,” Boller went on, adding that the parish recently held a prayer service for “victims of racism” and erected a display of photos of George Floyd, Breonna Taylor, and Ahmaud Arbery.

“In that context, we adapted a version of a pledge for racial justice used elsewhere in Christian circles,” Boller said. “We invite people to take the pledge … after the post communion prayer and before the final blessing — a time when many churches have announcements. People are invited to respond yes to each question; some choose not to.”

The parish’s Pastoral Council posted a statement last Friday noting that the pledge in question had received more attention due to the fact that, like many churches, St. Francis Xavier’s services have been live-streamed on the internet during the pandemic, but the truth is that this despicable act of bringing politics and racial tensions into the Church, that should be above all politics, is disgusting.