Earlier today, Lebanon’s President Michel Aoun finally admitted the possibility that a missile may have been to blame for the Beirut disaster. Aoun stated that he had asked France for satellite images to see if there were warplanes or missiles in the air at the time of the blast. This differs from the main narrative of recent days, which focused on investigating Lebanese port and customs officials for negligence.

After this statement, the New World Order went into a state of panic, with the United Nations warning that Lebanon faced a humanitarian catastrophe, which is their way of saying that they will be sending in troops if they start questioning the official narrative of the accident.  In the meantime, a Masonic-inspired petition to put Lebanon under a French mandate has garnered more than 50,000 signatures in 24 hours. For this reason, the ultimate puppet of the New World Order, President Emmanuel Macron, landed in Beirut on Thursday morning to show support for France’s Middle East protegè and former colonial-era protectorate, but also to avoid chaos as protests are already erupting all over Lebanon. 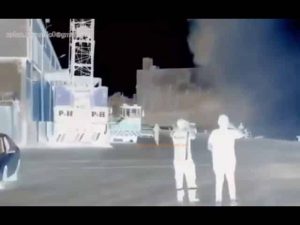 In a breathtaking alleged infrared video, that seems to be more of a “digital negative” of a video that some claimed was portraying an Israeli nuclear missile, made headlines on alternative media after YouTube censored it all over their platform earlier today, demonstrating unprecedented efficiency after a complaint was filed by the Israeli government. Fake or real the video is causing a huge controversy. 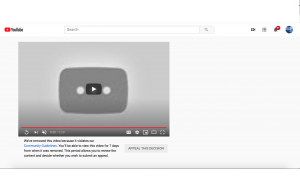 This unusual decision is evidence, not necessarily that the video is genuine, of course, even if some experts say that you can’t fake such infrared or negative images, but that Israel’s Sabbatean-Frankists seem to be in a deep state of panic for the first time in a very long time. In the meantime, Hezbollah Secretary General Sayyed Hassan Nasrallah conveniently denied that his party has a warehouse at the Beirut port, after all, the mega-explosion destroyed any possible evidence.

I posted the video in question on my Italian YouTube channel Ordo Illuminatorum Universalis yesterday afternoon, but it was removed after reaching almost 20 thousand views in only a few hours, for allegedly violating Youtube Community Guidelines, and on top of that, I will not be able to do things like upload, post, or live stream for 1 week on my increasingly popular Italian channel. Initially it said I would have the possibility of appealing, but that option was quickly removed. The censorship continues at leozagami.com but we will never stop our fight against the oppression and injustice of the New World Order!

2 thoughts on “A Missile may have been to blame, says Lebanon’s President Michel Aoun after YouTube is found Scrubbing Video Evidence”