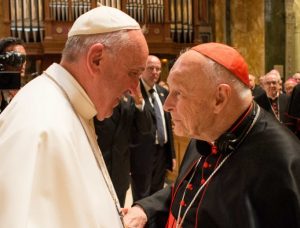 Disgraced former Cardinal McCarrick ran a Vatican Epstein style ‘Sex Cabal’. Children were assigned to rooms and paired with adult clerics, but the truth on this monster of the Catholic Church is coming out, as a new lawsuit claims the former Cardinal allegedly ran a depraved sex ring of underage boys at the Sea Girt beach house on the Jersey Shore, just like Jeffrey Epstein did in Palm Beach with underage girls. Just like in Palm Beach, there was a Ghislaine Maxwell figure scouting the future victims to the predator. In McCarrick’s case, it was the principal at a Christian Brothers high school who helped procure victims for McCarrick and other clergy abusers in the early 1980s.

The suit, filed by a man using the pseudonym Doe 14, claims that in 1982 and 1983 when he was 14 years old, he and other victims were taken on weekend overnight trips to the New Jersey beach house. The suit also shows how McCarrick steadily climbed the hierarchy of the church despite being dogged by accusations of abuse for decades.

The plaintiff’s controversial lawyer Jeff Anderson, also clearly said that papal power is to blame to include Pope Francis, as he cited shocking claims made earlier by the controversial Archbishop Carlo Maria Vigano. Let’s hope the authorities investigate McCarrick’s illegal activities in China, where he was offered underage boys for his unconditional loyalty in the creation of the new Vatican-China alliance. An anonymous source claims the CCP recorded tapes of sexual interaction between McCarrick and young Chinese children to use to blackmail the Vatican. The pedophile mafia is being exposed more and more on all fronts but I’m sure the worse is yet to come after The Vatican sold the “Catholic Faith” to China for $2 billion a year !