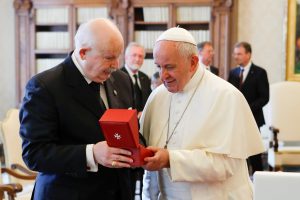 While the world wonders about the whereabouts of North Korean dictator Kim Jong,  a “similar” situation for the fate is happeneing in Rome. Fra’ Giacomo dalla Torre del Tempio di Sanguinetto,  the current Grand Master of the enormously influential Sovereign Military Order of Malta, is said to have died from COVID-19 by some Italian media.

Giacomo dalla Torre del Tempio di Sanguinetto Prince and Grand Master of the prestigious Catholic Order was elected after the controversial resignation of Fra’ Matthew Festing in 2017 when Pope Francis and the Jesuits decided to take over the Order that was becoming increasingly hostile towards the Pope.

Dalla Torre’s experience with the Knights of Malta began in the 80s when he became a Knight of Honor and Devotion of the Sovereign Order in 1985 and took vows as a Knight of Justicein 1993. In 1994 he was elected Grand Prior of Lombardy and Venice, an important position he held until 1999. From 1999 to 2004 he was nominated as a member of the Sovereign Council of the Knights of Malta. In 2004, dalla Torre was elected Grand Commander of the Order. In 2008, as Grand Commander, he automatically became Lieutenant ad interim (acting head of the Order) upon the sudden death of the 78th Prince and Grand Master, Fra’ Andrew Bertie, on the 7th of February until the election of the 79th Prince and Grand Master, Fra’ Matthew Festing, on the 11th March 2008. The group’s leader, the Prince and Grand Master of the Order of Malta, is elected in closed session, and normally retains the title for life, but Festing was eventually pressured to resign in what many describe as a coup d’etat by the Jesuits.

On 24 January 2009, dalla Torre who has always been considered very close to the Society of Jesus, was elected Grand Prior of Rome that began the Jesuit bid to take-over the once independent Sovereign Order of Malta. Dalla Torre was re-elected Grand Prior of Rome on the 12th of February 2015 and held the position until he was finally elected Lieutenant of the Grand Master in 2017 after the resignation of Festingand on the 2nd May 2018 he was finally elected Prince and Grand Master with the blessing of the Jesuit Pope.Since early December 2016, there has been a civil war within the Knights of Malta but facts and original source documents have been few despite the worldwide press coverage.

One published article speaks of “treachery… greed, cover-ups, betrayal, corruption… blackmail… a successful coup” involving the highest levels in the Vatican and a suspicious 120 million Swiss franc account rumored to be of Nazi or other dirty money origin and managed by its Geneva-based trustee, A. S., who appears in the Panama Papers.

The Knights of Malta are one of the most influential and powerful Roman Catholic Orders with over 13,500 contributing members.The group includes many deep state politicians, deep state actors, members of world governments, intelligence agencies, the banking industry, Big Media, and the military-industrial complex which fits uncomfortably with its stated aims of “poverty, chastity and obedience.”

The late Fra’ Giacomo dalla Torre del Tempio di Sanguinetto was regarded as one of the most influential figures in the secretive world of Vatican Knighthoods connected to the Illuminati so this news is pretty shocking for some people who thought the elite were immune to the virus.The Order of Malta, which has Permanent Observer status at the United Nations, issues its own passports and used to be considered a separate country even by the Vatican until Fra’ Giacomo dalla Torre del Tempio di Sanguinetto took control of the rebellious Order in 2017.

2 thoughts to “Shocking News from Rome! The Grand Master of the Knights of Malta dies of COVID-19!”