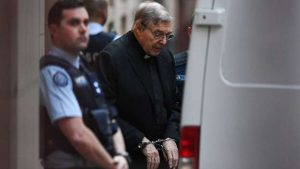 Cardinal George Pell will have his last chance to have his conviction for sexually abusing two 13-year old choirboys overturned when his lawyers plead his case to the High Court of Australia March 11-12. But the full bench of Australia’s highest court – either five or all seven justices – will take several months to determine the fate of the former senior adviser to Pope Francis. For now, Australia’s most senior Catholic will remain, as he has since his March 2019 sentencing, in virtual solitary confinement in a provincial prison. If the High Court fails to overturn the verdict of a 12-person jury that found him guilty of four counts of sexual assault and one count of child rape, Pell, 78, will spend at least 32 more months in prison.

However, the Vatican is hopeful. At the end of January, a French cardinal Philippe Barbarin, the Archbishop of Lyon and the most high-profile French Catholic cleric to face trial, accused of covering up the sexual abuse of minors, has had his conviction overturned after an appeals court determined there was no “intentional element” in his failure to report a predatory priest to the police. But there is also another problem for the Vatican that is preparing to release the results of an internal investigation into Theodore McCarrick, the infamous former cardinal and archbishop who was defrocked last year after the exposure forced the Vatican to admit he was found sexually abusing minors.

So for all these reasons, Vatican officials will now be watching the appeal by Cardinal George Pell closely, the most senior Catholic figure in the world to be jailed for child sexual abuse, which is expected to be heard in less than a month. Pell faces a minimum of three years and eight months, of a six-year sentence, handed down by Chief Justice Peter Kidd of the Victorian Supreme Court, who described Pell’s offenses as “a brazen and forcible sexual attack on the victims.” The first appeal by Cardinal Pell was dismissed 2-1 by a panel of judges of the Victorian Supreme Court in August. Once the court proceedings conclude, Vatican officials have said they will proceed with their investigation of the prelate who has been the most powerful figure in the Australian Catholic Church and the Opus Dei for more than two decades.

Senior Australian lawyers, who asked not to be identified because of the sensitive nature of the case, told Catholic News Service that the High Court has rarely overturned jury convictions. The historical rate of overturning jury decisions by the top court is 13% but this is the first time they are dealing with a senior Vatican official of the level of Cardinal Pell.

Pell’s case might be used as a scapegoat because it has generated global publicity particularly in Australia where a landmark Royal Commission into Institutional Child Sexual Abuse was critical of the Catholic Church. Critics of Pell’s convictions, including outspoken senior Catholic lawyers, politicians, and conservative commentators, claim he is the victim of a witch hunt against the Church. Regardless of the High Court’s decision, Pell is facing at least three civil lawsuits brought against him for historical sexual abuse by people claiming to be victims, or their families if they are deceased, but Pope Francis wants him back in Rome because of an internal problem within the Vatican bank. In a nutshell, the Secretariat of State, the Vatican’s ultra-powerful coordinating agency, has been involved in a huge scandal last year that only Pell seems able to solve, but of course, he wants freedom and to be able to return to Rome in exchange. The problem was triggered by Holy See’s relationship with a disreputable Swiss bank that ended in internal dispute between the Secretariat of State and Vatican financial authorities. At the center of the conflict was originally a multimillion-dollar line of credit used to fund a controversial investment in London property speculation.

Sources inside the Vatican’s Prefecture for the Economy confirmed to CNA that a substantial part of the $200 million used to finance the Secretariat of State’s purchase of a luxury development at 60 Sloane Avenue came through credit extended by BSI, a Swiss bank with a long track record of violating money-laundering and fraud safeguards in its dealings with sovereign wealth funds.

In 2018, BSI was the subject of a damning report by FINMA, the Swiss financial regulator, which concluded that the bank was in “serious breaches of the statutory due diligence requirements in relation to money laundering and serious violations of the principles of adequate risk management and appropriate organization.”

The bank was absorbed by the EFG Group last year. The merger was approved by FINMA on the condition that it was “fully integrated and dissolved” within a year and that no BSI employee be given a senior management role in EFG. Had the merger not been approved by FINMA, BSI would have had its banking license revoked and the business shuttered.

On Nov. 4, CNA reported that in 2015 Cardinal Angelo Becciu attempted to disguise $200 million loans on Vatican balance sheets by canceling them out against the value of the property purchased in the London neighborhood of Chelsea, an accounting maneuver prohibited by financial policies approved by Pope Francis in 2014.

The attempt to hide the loans off-books was detected by the Prefecture for the Economy, led by Cardinal George Pell, who seems to be the only one with the solution to this big financial mess for the Vatican. However Pope Francis and the Vatican’s ongoing support and protection of Cardinal George Pell will make it clear to the whole world that Pope Francis and the church at the highest level are complicit in at least concealing the sexual abuse of children.