Temple of  The Swedish Order of Freemasons in Stockholm

Yesterday  I wrote about a heretic image featuring a gay Jesus wearing heels sitting with Drag Queens in an altarpiece placed in a famous Church in Sweden, but, unfortunately, this is not the only case of disrespect and heresy by the Swedish people towards Jesus Christ.

Last year, the Diocese of Västerås, a division of the Church of Sweden, was caught giving away an LGBTQ guide for “Christian queer kids.”  Here is the link: https://www.svenskakyrkan.se/filer/Broschyr_HBTQ_A3_kartvik.pdf

Christians may be stunned to hear that this extreme guide not only describes Jesus as “queer”but, also Joseph as a transvestite. No, this is not a radical college course about the Bible, it comes from the Church of Sweden, also involved in the infamous LGBTQ portrait in the Church of St. Paul in Malmo. The Church of Sweden (Swedish: Svenska kyrkan) the Evangelical Lutheran National Church, is the former state church, and its membership of 5,899,242 people account for 57.7% ( in 2018) of the Swedish population, despite only 2% of the church’s members that regularly attend Sunday services. The church, which identifies as Protestant, has created what it calls a “survival guide” for LGBTQ youth. 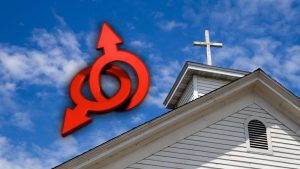 The Swedish news site, Nya DagBladet, states the church’s guide contains definitions and concepts, a bit about the Bible and LGBTQ, as well as Bible stories that it claims are related to the LGBTQ community. This happened mainly because of the increasing influence of certain Satanic sects on Swedish culture since the 1980s. Sweden is considered the headquarters of the Church of Satan in Northern Europe through charismatic figures likeauthor, publisher, musician, filmmaker, and magico-anthropologist, Carl Abrahamsson, a close friend and collaborator of the late Anton Lavey.  Abrahamsson is also involved in the leadership of the local Ordo Templi Orientis, that in the last two decades has infiltrated the Christian Swedish Rite of Freemasonry with people like Professor Henrik Bogdan of the University of Gothenburg that promotes Aleister Crowley within Swedish Freemasonry with a certain degree of success, ignoring the rule that prohibit non-Christians from joining, The Swedish Order of Freemasons, that works and controls the Swedish Rite of Freemasonry  that is practiced all over Scandinavia.

In the Swedish Rite constitutions, all members must be Christian men and visitors attending the chapter degrees (from grade VII onwards) must be recognized as Christians, or sign a statement asserting that they are Christians. The Swedish Rite that originated from the Strict Templar Observance is under the royal patronage of the King of Sweden, who used to be its Grand Master until the early 70’, and is closely associated with the Lutheran Church of Sweden involved with the recent mockery of Jesus Christ and other religious figures. Priests and bishops of the Church of Sweden (and some Catholic ones) even have a special role within the Swedish Rite of Freemasonry, particularly in grade VII and above and they don’t make a secret of it. You can check it out for yourself on their website and Wikipedia:

The Swedish Order of Freemasons that admits Christian men only, and is recognized by the United Grand Lodge of England as a Regular Masonic jurisdiction is operating however in clear violation of the Anderson’s Constitutions of 1723  and the basic tenets of Freemasonry that was originally born as a Christian institution and prohibits Atheists and irreligious Libertines to join the Order. We are living in dangerous times and we invite the Freemasons of Sweden to take immediate action or face the consequences of this never-ending insult towards Christianity.

2 thoughts on “Swedish Church Creates LGBTQ View of the Bible for Children under the guidance of the Swedish Rite of Freemasonry and the O.T.O”