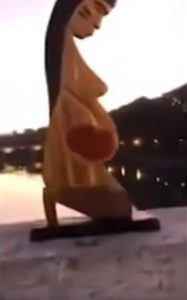 State of Pachamama seconds before ending up in the river Tiber

Two days ago, over 250 delegates at the Amazon Synod took part in a procession with banners and signs marking what they deem injustice felt by the indigenous peoples of the Amazon. Bishops, priests, indigenous leaders, and Catholic laity began a pilgrimage through Rome to “pray with their feet”and show support for the Synod, beginning at the foot of Castel Sant’Angelo and moving toward St. Peter’s Square, singing hymns and stopping for each of the 14 Stations of the Cross. Participants in colorful native robes, feathered headgear and even smoking a “peace-pipe” prayed through notes of pain and hope — with each station representing a region of the Amazon.

The pilgrimage began with a Native American from the Lakota tribe “incensing” the congregation with a bowl of burning sage — originally a pagan practice adopted and enculturated into Catholic liturgy. Present once again was the carved pregnant female figure of Pachamama that was seen for the first time on October 4,  when Pope Francis led a pagan  ritual in the Vatican gardens with an Amazonian woman as part of a supposed tree-planting ceremony. The woman, bedecked with a traditional feather headdress, prostrated herself before the tree and a pair of statues of naked pregnant women. The indigenous woman also shook a rattle in an apparent blessing or incantation over the group at the ceremony who included a Franciscan friar. Some members of the group prostrated themselves or knelt during the ceremony, while the Pope stood by.

The clearly pagan event inspired the traditionalist Catholic website LifeSite.com launched a petition after the ceremony, urging the Vatican to remove the pagan statues and any other allegedly pagan symbolismat the Synod that was displayed at Santa Maria in Traspontina Church near St. Peter’s Basilica in Rome. Church Militant reported how Communist and Socialist politicians from Brazil have used this place for fringe meetings to promote their own political and anti-Bolsonaro agenda at the Synod.

Today, at least two devout Catholics entered Santa Maria in Transpontina Church and removed the pagan statues and symbols of Pachamama filming the whole thing. A now-viral video shows a person removing the carved fertility figures from the Church of Santa Maria del Traspontina and throwing them into the River Tevere on the bridge next to Castel Sant’Angelo.

Pachamama is a goddess revered by the indigenous people of the Andes. She is also known as the earth/time mother.[ In Inca mythology, Pachamama is a fertility goddess who presides over planting and harvesting, embodies the mountains, and causes earthquakes. After the conquest by Spain, conversion to Roman Catholicism took place and the figure of the Virgin Mary was equated with that of the Pachamama for many of the indigenous people. However, in pre-Hispanic culture, Pachamama is often a cruel goddess eager to collect her sacrifices.  Animal sacrifices have been a part of such culture for thousands of years. The tradition continues today and can be observed first-hand in Bolivia’s La Paz’s Witches Market. Grotesque-looking llama fetuses are sold to superstitious buyers, who bury them under new homes in order to curry favor with Pachamama (mother nature). Rumor has it that for larger constructions such as apartment buildings or mines, humans are used instead to please La Paz’s.

Meanwhile, at the latest Vatican press briefing earlier today, the Prefect for the Vatican Dicastery for Communication, Dr. Paolo Ruffini, condemned the destruction of the controversial carved female figures, that critics have dubbed the “Pachamama,” as “theft.” Vatican spokesman Paolo Ruffini denounces the demise of Pachamama, which is now sitting at the bottom of the Tiber River.