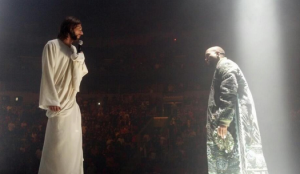 Kanye West is waging a frontal assault on Hollywood by admitting that the city of L.A. is actually “run by Satan,”  a sad truth that needs to be exposed. His attack against mainstream media in the coming days and weeks will cause a lot of scrutiny so we all need to pray for him. West, who is releasing his new album entitled “Jesus Is King” seems awake in this End times scenario, on the contrary of his collegues and friends in Hollywood.

Kanye has converted to Christianity bringing with him his enormous talent and passion.  Since the start of this year he has been performing his own version of Sunday service to the masses, and this highly religious experience has brought him to the desert of Arizona this summer, and will be featured in his upcoming documentary, “Jesus is King,” to be released in Imax theaters around the world on Oct. 25, 2019.

Kanye said he regrets comparing himself to Jesus in the 2013 album “Yeezus” and he said he has now made a complete change since then. He openly denounces the City of Angels along with the infamous Social Media Instagram in his latest 35-minute  work, “Jesus is King.” Times are changing, even for Kim Kardashian, who has been extremely supportive of Kanye’s Born Again choice, keeping fans constantly updated on all the latest developments regarding his new album. Of course, the mainstream media is already saying that “His glory days feel a very long time ago,”but I am sure that my readers will appreciate his  choice of leaving the world of Hollywood and Satan’s minions behind.

Many Christians feel critical of Kanye’s sudden change but  famous friends describe  him as a genuine born-again Christian who has his heart in the right place.