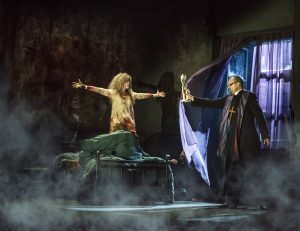 As we all know, on Sunday Trump went on Twitter to tell four Congress members from the extreme left of the Democratic Party to “go back” to the “corrupt” countries they came from. The four representatives in question are Ayanna Pressley (D-MA), Ilhan Omar (D-MN), Alexandria Ocasio-Cortez (D-NY), and Rashida Tlaib (D-MI).  After Trump’s Tweet, the Demoncrat-controlled House of Representatives passed a resolution on Tuesday evening condemning President Trump’s remarks from last weekend, describing them as “racist”.

The situation has become so tense in Congress that the Vatican Jesuits had to intervene directly for an unprecedented exorcism. Reverend Patrick Conroy SJ, an American lawyer and a Jesuit priest who is serving as the 60th Chaplain of the United States House of Representatives, and another Jesuit priest prayed to “cast out all spirits of darkness” on the House floor this morning, something extremely unusual.

“This has been a difficult and contentious week in which darker spirits seem to have been at play in the people’s House,” Father Conroy prayed, “In your most holy name, I now cast out all spirits of darkness from this chamber. Spirits not from You.”

“I cast out the spirit of discouragement, which deadens the hope of those who are of good will,” he added. ” I cast out the spirit of petty divisiveness, which clouds the sense and the desire to be of fruitful productivity in addressing the issues more appropriately before this House. I cast out any sadness brought on by the frustration of dealing with matters detrimental to the honorable work each member has been called to engage in.”

Father Conroy SJ then prayed to God to “anoint your servants here in the House with a healing balm to comfort and renew the souls of all in this assembly.”

“May your spirit of wisdom and patience descend upon all so that any spirit of darkness might have no place in our midst,” he added.

Father Conroy SJ delivered his first prayer as House Chaplain back in the Obama era, on May 26, 2011 and since then he has, of course, been closer to the Democrats, as all Jesuits usually are. Satan and his Legion are obviously trying in every way to take control of Congress to attack Donald J. Trump,  thanks to Demoncrats like Ocasio-Cortez. The situation is obviously out of control as more than two dozen Democrats who hadn’t previously taken a position voted on Wednesday to advance a measure to impeach the President over his “racist” attack on their colleagues.

House Democrat impeachment support has gained new momentum despite Speaker Nancy Pelosi’s attempts to halt the effort, as she seems the only one that is not completely possessed. I would like invite my readers to check out my latest book Confessions of an Illuminati Vol.6.66 on the Exorcism subject in relation to the Jesuits to understand more on this epic Spiritual Warfare that has now reached the highest levels of society in the United States.

In the meantime,  a new poll indicates that Republicans actually like Trump more after the Tweet controversy. God is on our side, Amen.