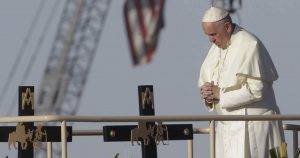 Vatican News announced yesterday evening, that Pope Francis has donated 500,000 dollars to assist migrants at the U.S. border with Mexico. The funds, that come from thedonations or payments made directly to the Holy See, known as the Peter’s Pence collections, will be distributed among 27 projects promoted by sixteen Mexican dioceses and religious congregations.

According to a statement from Peter’s Pence, “In recent months, thousands of migrants have arrived in Mexico, having traveled more than 4,000 kilometers on foot and with makeshift vehicles from Honduras, El Salvador, and Guatemala. Men and women, often with young children, flee poverty and violence, hoping for a better future in the United States. However, the U.S. border remains closed to them.”

The problem is, it was the Jesuits and the Pro-Migrant message to Central America by the first Latin Pope that has created this unprecedented crisis in the first place. Pope Francis has, in fact, encouraged with his words, the growing phenomena of the migrant caravans attempting to cross U.S. soil.  Helping the Jesuits in this mission to gradually destabilize the United States and President Trump, and eventually re-establish the supremacy of the Catholic Church in Latin America, are several Catholic congregations, such as the Scalabrini International Migration Network, the Franciscans, the Caritas organizations, and some national conferences of bishops.

The Catholic Church has long dominated cultural life in Latin America, a region that accounts for 40 percent of the world’s Catholics. But although it remains the single largest church globally, over the last half century Catholicism in Latin America has steadily lost its unquestionable monopoly to Protestant—and specifically Pentecostal—churches, which have grown at a remarkable pace.

The Pope has highlighted issues, central to the Church in Latin America, including poverty, social justice, and human rights. He has also recognized and praised the Pentecostal spirituality that is increasingly visible in Latin America. However, Pope Francis wants to be able to reverse the long-term erosion of the Catholic Church’s position in the region, and the 500,000 dollar donation is not only intended to assist the more than 75,000 people who arrived in Mexico in 2018 in six migrant caravans, but also to show Latin America that the Catholic Church cares. At the end of the day, 500,000 dollars in aid is only a massive propaganda stunt to place Pope Francis and the Vatican back on moral high ground after the endless scandals of sex abuse inflicted by the clergy.

The Vatican said in their statement “All these people were stranded, unable to enter the United States, without a home or livelihood,” but the Catholic Chruch saved them by hosting “thousands of them in hotels within the dioceses or religious congregations, providing basic necessities, from housing to clothing.”

One thought to “Pope Donation to Assist Migrants at U.S. Border is propaganda”