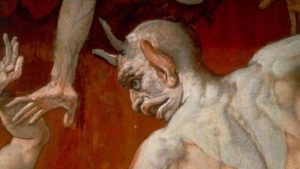 The first pedophile Pope where we find a historical trace was Saint Damasus, who lived in the fourth century. The Catholic Church fears that this truth could be revealed to this day, because he presided over the Council of Rome of 382 that determined the canon or official list of Sacred Scripture. All the way up to the sixteenth century, there have been at least another 16 pedophile Popes known to historians, the last being a certain Pope Julius III (1487-1555).

In the mid-16th century with the Inquisition, the Catholic Church began to cover up all the crimes of a “sexual” nature committed by clerics. A practice that continues with success even today, following the same effective rules of secrecy or if necessary, mystification and manipulation of reality through public declarations once the secrecy has been somehow violated.

The triumph of Constantine the Great (AD 306–337) and the subsequent state patronage of Christianity, sanctioned by the First Council of Nicaea, the first ecumenical council in history, built to attain consensus in the expanding new faith through an assembly representing all of Christendom, established to some extent the malignant roots of the pedophile elite of the Roman Catholic Church as we know it. It opened up vast new opportunities for the sexual predators of the ancient Illuminati elites bloodlines, and in the mind of Constantine the priesthood was beyond reproach even with his own grandiose power. During the reign of the Roman Emperor, Christianity began, in fact, to transition to the dominant religion of the Roman Empire. Historians remain uncertain about Constantine’s reasons for favoring Christianity, but some say he even remained loyal to Paganism.

Constantine said that it was not permissible for him, as a man, and one who was subject to the judgment of priests to examine cases touching gods, who cannot be judged save by God alone. So the emperor Constantine considered the clergy untouchable, almost considering them as gods because of their spiritual work, and this is how the Vatican still considers itself to this day. Petitions containing accusations against priests that were regularly given to Constantine were put into the fire without the emperor even looking at them. Ecclesiastics, especially in Rome, were raised beyond mortal law, with the result that clerical so-called celibacy brought great immorality in its trail. Not just the fleecing of pious matrons, but teenage mistresses, incest, prostitution, and perversion ever after would be the mark of the Church triumphantly spreading across the empire. The young, the old, male and female, the naive and the headstrong, all were at risk. Sexual corruption became a systemic and endemic feature of the Holy Mother Church. Then, as now, wrongdoers were seldom punished – scandal was bad for morale.

The so-called “Apostolic Constitution” of the early 4th century – rules and regulations for the clergy – required unmarried ministers to remain celibate but allowed priests already married to keep their wives. No doubt, the double standard set up tension within the ranks. Then in 366, Pope Damasus set an example by abandoning his own wife, the boss of bosses knew what he was doing and set a new standard of hypocrisy:

“A celibate priest owed total allegiance not to wife and children but to the institution. He was the creature of the institution. The Roman system was absolutist and hierarchical.  For such a system to work, it needed operatives completely at the beck and call of superiors … The papal system would collapse without the unqualified allegiance of the clergy; celibacy alone could guarantee that sort of allegiance.”

The philandering Saint Damasus, known at the time as the “Matronarum Auriscalpius” (“ladies’ ear-tickler”), also ran Rome’s city brothels during his time as Pope Damasus I, that was heavily patronized by the clergy and visiting pilgrims.

The Vatican pressure to “unwed” and get rid of the heterosexual clergy went on for generations to facilitate the take over of  the Church by the pedophile lobby. Twenty years after Damasus, Pope Siricius actually forbade priests who remained married from sleeping in the same bed as their wives. Following the Second Council of Tours, (567) a priest who broke this rule could be excommunicated for a year and his wife would receive a hundred lashes. And yet it remained commonplace for Catholic priests to have multiple wives and mistresses. Pope Gregory II in a decretal in 726 ruled that, “When a man has a sick wife who cannot discharge the marital function, he may take a second one, provided he looks after the first one.” (De Rosa, p349)

Married clergy were found in the Catholic Church until the Second Lateran Council of 1139, when Pope Innocent II, annulling the decisions and ordinations of “anti-Pope” Anacletus II, voided all marriages of priests. The “reformer” Innocent was the very same Pope who confirmed the condemnation of French philosopher and scholar Peter Abelard (castrated and confined to a monastery).

The scandals surrounding the Vatican are very heavy at the moment, but the Church has always waged a losing battle with its own vice-ridden staff in Rome since ancient times. The problem was that transgressions from official policy often began right at the top with the people in charge of the Church. Fellow priests put one of the first popes, Sixtus III, (432-40) on trial for seducing a nun. He was acquitted after quoting from Christ in his defense: “Let you who is without sin cast the first stone.”

In the centuries that followed, political skullduggery and a corrupt election process thrust one improbable candidate after another into position, as god-fearing believers looked on in impotent horror, while pedophiles increased their influence on the Catholic Church. In fact, so many Vicars of Christ have been denounced as the “Worst Pope Ever”  just as Pope Francis is today. Sergius III (904-11), known by his cardinals as “the slave of every vice,” came to power after murdering his predecessor. He had a son with his teenage mistress — the prostitute Marozia, 30 years his junior — and their illegitimate son grew up to become the next pope. With top Vatican jobs auctioned off like baubles, the papacy entered its “dark century.”

The  extremely young 17-year-old Pope John XII (955-64) was accused of sleeping with his two sisters and invented a catalog of disgusting new sins. Described by a Church historian as “the very dregs,” he was killed at age 27 when the husband of one of his mistresses burst into his bedroom, discovered him in the blatant act, and battered his skull in with a hammer.

During his time as Pope he wrote to Henry, the new Archbishop of Trier, granting him the pallium and encouraging him to lead a good life. In 958, he even granted privileges to Subiaco Abbey, on condition that: “Every day priests and monks should recite, for the good of our soul and the souls of our successors, a hundred Kyrie-eleisons and a hundred Christe-eleisons, and that thrice each week the priests should offer the Holy Mass to Almighty God for the absolution of our soul and those of our successors.”

Another great pervert of the Catholic Church was Benedict IX, (1032-48) who continually shocked even his most hardened cardinals, for his debauchery with young boys in the Lateran Palace. Repenting of his sins, he actually abdicated to a faraway monastery, only to change his mind and seize office again. He was “a wretch who feasted on immorality,“ wrote Saint Peter Damian,  “a demon from hell in the disguise of a priest.”

Then we have Boniface VIII. After massacring the entire population in the Italian town of Palestrina, Boniface VIII (1294-1303) indulged in threesomes with a married woman and her daughter and became renowned through Rome as a shameless pedophile. He famously declared that having sex with young boys was no more a sin than rubbing one hand against the other — which should make him the patron saint of the pedophile Catholic priests of today. Fortunately, poet Dante reserved a place for him in the eighth circle of Hell.

Later on all pretense at decorum was abandoned when the papacy moved to Avignon in southern France for 75 years. Bon vivant Clement VI (1342-52) was called “an ecclesiastical Dionysus” by the poet Petrarch for the number of mistresses and the severity of his gonorrhea. Upon his death, 50 priests offered Mass for the repose of his soul for nine consecutive days, but the French would agree that this was nowhere near enough.

Decamping back to Rome, the papacy hit its true low point in the Renaissance. (Church historian Eamon Duffy compares Rome to Nixon’s Washington, “a city of expense-account whores and political graft.” Sixtus IV (1471-84), who funded the Sistine Chapel, had six illegitimate sons — one with his sister. He collected a church tax on prostitutes and charged priests for keeping mistresses, but critics argued that this merely increased the prevalence of clerical homosexuality.

Another infamous figure was Innocent VIII, (1484-92) whose rule is remembered as the Golden Age of Bastards: He acknowledged eight illegitimate sons and was known to have many more, although he found time between love affairs to start up the Inquisition. On his death bed, he ordered a comely wet nurse to supply him with milk fresh from her breast.

The vicious Rodrigo Borgia then arrived, who took the name Alexander VI (1492-1503), and presided over more orgies than actual masses, wrote Edward Gibbon . A career highlight was the 1501 “Joust of the Whores,” when 50 dancers were invited to slowly strip around the Pope’s table. Alexander and his family gleefully threw chestnuts on the floor, forcing the women to grovel around their feet like swine; they then offered prizes of fine clothes and jewelry for the man who could fornicate with the most women. Alexander’s other hobbies included watching horses copulate, which would make him “laugh fit to bust.” After his death — quite possibly poisoned by his pathological son, Cesar Borgia — the Pope’s body was expelled from the Basilica of Saint Peter as too evil to be buried in sacred soil.

Then we have Julius II, (1503-13) who is remembered for commissioning Michelangelo to paint the Sistene Chapel’s ceiling. He was also the first pope to contract “the French disease,” syphilis, from Rome’s male prostitutes. Can you imagine that on Good Friday of 1508, he was unable to allow his foot to be kissed by the faithful as it was completely covered with syphilitic sores?

Last on my list of perverted Popes, is Julius III, (1550-55) who fell in love with a young beggar boy he spotted brawling with a vendor’s monkey in the streets. The pope went on to appoint this illiterate 17-year-old urchin as a  cardinal, inspiring an epic poem of the day, entitled “In Praise of Sodomy,” probably written by a disgruntled archbishop in his honor.