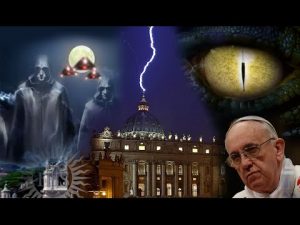 The Vatican’s clerical abuse summit was a complete failure, and the Vatican knows it. Cardinal Reinhard Marx, one of the Holy Father’s closest advisers, spoke frankly and openly during the event about records not being kept, or even being “destroyed” to cover-up abuse, and the contradictions began in the staging of the summit as I pointed out many times in earlier articles.

Pope Francis said that it was necessary to “deflate” expectations, yet the Vatican media operation treated it like a super-synod, complete with daily press conferences and a torrent of written statements that in the end amount to empty promises because the Vatican is controlled by a pedophile cult.

In the meantime, a shocking video of “Satan’s little helper” Cardinal Pell’s first police interview over the 1996 abuse allegations that eventually locked him in prison, has been released to the public. It shows him lying, described as a “completely false, madness.”

Although Pell did not take the stand at his trial in Melbourne, the footage was shown to the jury at his trial.  However, Cardinal Pell’s plans to appeal his conviction for rape which as we saw in the last few days into confusion by the extraordinary statement made by his own barrister which described the assault the Cardinal was found guilty as a “plain vanilla sexual penetration case where the child is not actively participating”.

The Vatican and the dark side of the Illuminati headed by Grand Master Giuliano Di Bernardo and Piergiorgio Bassi, seem to be in a complete state of panic these days as the various factions are fighting to cover-up their crimes and protect the pontiff at all costs. At the same time, Pope Francis is still trying to save and protect his close allies in the Illuminati Satanic elite, the evil doers that support him like Nicolás Maduro, Emmanuel Macron, and Canadian Prime Minister Justin Trudeau.  Such figures are all connected to the  mysterious International organization for the destinies of the world,and their headquarters located in Moscow, known as the Center for information, analysis, and strategies of situations, operate under the direct control of the President of the Russian Federation. At the top of this section of the New World Order that deals with the UFO phenomenon, a senior retired official of the Ministry of Defense, Lieutenant-General in reserve, a P.h.D., and a fellow of the Academy of Natural Sciences Alexey Savin very close to Vladimir Putin.

Italian journalist Giacomo Amadori, an old acquaintance of mine, is to my knowledge one of the few journalists in the world who has written and interviewed members of the secretive, International Organization for the Destinies of the World, that I have exposed in my latest book, Confessions of an Illuminati Vol. 6.66. In one article in particular, published in the Italian newspaper Libero, on the 14th of August 2016, Amadori revealed that the Italian spokesman of the organization, Piergiorgio Bassi, a high-level Freemason, and vice president of the International Academy of the Illuminati in Rome (previously cited in my Confessions), met in a fancy restaurant in Rome, called Pescheria Rossini, with none other than former Obama aide John Podesta.  At the time, Podesta, who was Hillary Clinton’s campaign chairman, talked with Bassi about the help and  instructions given to them by negative aliens, these interdimensional beings working in Moscow. Many of our entity contact experiences involve beings that are interdimensional, sharing the Earth with us in different dimensional realms, but most of them are demonic in nature and should be feared. These beings have been manipulating the world of affairs for thousands and thousands of years, since the Atlantian Cataclysm, for their own purposes. See the Ages of Humanity. These are inter-dimensional and extradimensional beings known as Fallen Angels in ancient history and they use many technological manipulation methods to Mind Control and negatively manipulate the future direction of the human race.

The UFO’s secrets are still the biggest and most dangerous in the world. Some of these negative groups have access to advanced technologies that have been developed over many millions of years in other Universal systems or Galaxies, however, most of their technological advancements have come from the creation and use of Artificial Intelligence that is about to take over our planet. This “AI God” believed by the Illuminati and corrupt Freemasons to bring world peace, will implement instead, the birth of Cyber Satan. 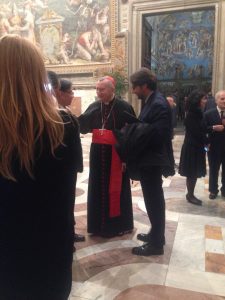 His Eminence Pietro Parolin Cardinal Secretary of State of the Vatican together with Freemason and Vice President of the Illuminati Academy Piergiorgio Bassi on his side.

Remember when Hillary Clinton made her famous campaign promise to open up files on Area 51? President Trump knows that today’s reality is being strongly manipulated by evil demonic forces behind the alien phenomenon that collaborate with various key players of the New World Order that so vehemently oppose him every day, and he is not going to agree to work on an alien disclosure like Hillary, that will help the negative Aliens factions to manipulate further humanity in hiding the birth of Cyber Satan. The leading alien forces that include the Fallen Angelic Annunaki hybrids working with the Vatican Jesuits and the Russian Federation, are the Legion of Satan and need be stopped before is to late!