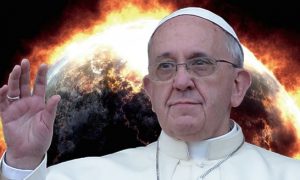 “Perhaps we have arrived at the End Times,”

Those are the prophetic words stated one year ago by Cardinal Raymond Burke, one of Pope Francis’ main opposers. Prophetic signs have indeed manifested almost weekly, all over the world. Devastating earthquakes, killing hundreds, in places including Indonesia, where a second earthquake hit on Friday, September 28th. The 7.5 magnitude earthquake struck six miles from the country’s coast and triggered a tsunami – a huge wave which hit the coastline. Across the west coast of the United States, wildfires rage. The California wildfires are a series of wildfires that have burned constantly across the state of California during the whole of 2018. A total of 6,814 fires burned an area of 1,508,915 acres (6,106.36 km2), according to the California Department of Forestry and Fire Protection and the National Interagency Fire Center, as of October 7, 2018.

There are also the  growing political tensions which could lead, at any moment, to a series of civil wars in the US and Europe, and possibly a World War with China.

In regards to the signs of the End Times, in Ezekiel end-of-days prophecy, he foresees the Dead Sea flourishing with life – something that was considered to be impossible due to its high salt content. A few days ago, it was reported that Israeli photojournalist Noam Bedein had photographed sightings of marine life in small sinkholes around the Dead Sea, as well as clear signs of vegetation growing. Mr Bedein, who works for the Dead Sea Revival Project, to preserve the Sea and other Israeli “water treasures” said the fish prove the water is “anything but dead.” Photos released by the Dead Sea Revival Project show, in fact, tiny fish swimming in water reportedly from the Dead Sea, revealing another important sign of the incoming End Times.

We also see the birth of the Red Heifer, in September 2018, as a result of the Temple Institute’s Red Heifer program. An entirely red female calf was born, paving the way for re-establishing the Temple service and marking the final stage of redemption for the Jewish people. One week after its birth, the newborn red heifer was certified by a board of rabbis as fulfilling all the Biblical requirements. The rabbis emphasized that the heifer could, at any time, acquire a blemish rendering it unsuitable so they will be inspecting the calf periodically to verify its condition, but this is another verifiable sign of the End Times.

The ongoing war in the Vatican is demonstrating to the world the true colors of Pope Francis, the first Jesuit Pope. The Vatican’s prefect for the Congregation for Bishops,Cardinal Marc Ouellet, released a letter yesterday morning refuting charges that Pope Francis lifted sanctions against former Cardinal Theodore McCarrick, and stated that charges made by a former Vatican ambassador are an “unjustified attack”on the Pope, and, “cannot come from the Spirit of God.”

“Your current position seems to me incomprehensible and extremely reprehensible, not only because of the confusion that sows in the people of God, but because your public accusations seriously damage the reputation of the Successors of the Apostles,” wrote Cardinal Marc Ouellett, in an October 7th letter addressed to Archbishop Carlo Maria Vigano, who has been increasingly isolated by Pope Francis and the pedophile mafia that are destroying the Church.

Is there any doubt these are the End Times we are living?