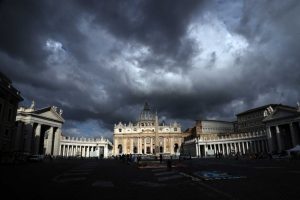 This morning in Rome, the American Episcopal Conference conducted by Cardinal Daniel DiNardo begins, to meet with Pope Francis, who called for a crisis meeting over the growing sex abuse scandals in North America. Among the group of US Cardinals, we find Cardinal of Washington Donald Wuerl, who returns to Rome for the second time in just a week and is said to be ready to resign under extreme pressure from his colleagues. This is not only an effect of the “Viganò report”, but also Pennsylvania Attorney General Josh Shapiro, who heavily criticized Wuerl for the way he handled cases of sexual abuse when he was Archbishop of Pittsburgh.

The unprecedented crisis in the US Church is growing and creating a very difficult situation for the Vatican, but surprisingly enough, this is not the only problem for Pope Francis today, as an equally huge scandal is now unfolding in Germany thanks to a report recently commissioned by the German Bishops’ Conference to the Universities of Mannheim, Heidelberg, and Giessen.

In Germany, the abuse scandal originally broke in January 2010, following the complaints of Klaus Mertes SJ, the Jesuit director ofthe Canisius-Kolleg (CK), a private, Catholic Gymnasium in Berlin, run by the Jesuits. Around 20 former students claimed that they had been sexually abused by two Jesuit teachers of this school, Wolfgang S. and Peter R. The abuse is believed to have been committed during the 1970s and 1980s.

Mertes, sent shock waves through the German Catholic Church when he exposed the systematic sexual abuse at the elite school by his fellow Jesuits. In an interview given to Der Spiegel, he spoke about the Church’s response to the abuse scandal and his anger at the Vatican. Mertes said words we should remember as they clearly denounce the silence of the German Church on these matters: “We downplayed sexual violence and kept it quiet for too long. It was only because of the victims that I realized, in early 2010, that the offenders planned their crimes systematical.”

Incredibly enough a couple of months later in April 2010, powerful Italian Cardinal Angelo Sodano referred to the events in Germany as “the petty gossip of the moment.”

In the summer of 2017, another report prepared by a lawyer called Ulrich Weber, later disclosed by the German media,revealed that about 547 children of the choir of the Ratisbonian Cathedral, directed for 30 years by Pope Ratzingers’brother, George Ratzinger, have been abused for over four decades. Dozens of victims were heard by Ulrich Weber, as well as those running the institution, and all used the same words to denounce the internal climate: “A prison,” “hell,” “a concentration camp.”

However, with this latest report about to be made public, it’s the first time that an Episcopal Conference has actually commissioned their own research on sexual abuse at a national level. This groundbreaking report based on documented research of over 38 thousand personal files archived between 1946 and 2014, from 27 German dioceses, shows that at least 3,677 minors have been abused by Catholic priests in Germany since the end of the Second World War. Even the Nazis never committed such atrocities on children!

This new shocking research has uncovered stories of violence involving 1,670 priests, about 4.4% of all priests active in Germany, and they are all accused of sexually abusing children who in half of the cases were under the age of 13. The report will be officially presented by Cardinal Reinhard Marx in Fulda, in the Hesse region of Germany, on September 25th,2018, and will probably mean the end of the German Catholic Church as we know it, but also the end of Pope Francis who is still trying to avoid resignation, but faces insurmountable challenges on both sides of the Atlantic.