Just over three hundred years ago, the Premier Grand Lodge of England, the first Masonic Grand Lodge in the world (known as United Grand Lodge of England or UGLE since 1813), was founded in London to govern Freemasonry in 1717. They are still considered by most Freemasons the Vatican of Freemasonry, the ones who set masonic regularity standards for the rest of the world. Just like the Vatican, they seem to have completely lost their mind over the gender policy issue, promoted in recent years by the New World Order.

In 2006, under fierce criticism, Pope Francis stated that Catholics must discern difficult situations of sexual morality on a case-by-case basis, even when presented with a person who is considering, or has had gender reassignment surgery. But even liberal Pope Francis has not yet approved of gender reassignment for his Catholic hierarchy of priests and nuns. Who knows, maybe that’s the next  thing on his list of heresies?

In the shocking new guidelines issued last week by the United Grand Lodge of England for Gender Reassignment Policy, women and men who have undergone gender reassignment surgery can now join Masonic Lodges without having any discrimination problems, and will  be supported in the process. The strangest thing to come out of this new set of guidelines issued by the UGLE, is that women who have not undergone reassignment surgery will continue to be exempt from joining regular Freemasonry, but if they commit themselves to a sex change and become a man, they will eventually be able to fully join the Craft. The United Grand Lodge of England is encouraged to treat such cases with “utmost compassion and sensitivity” adding,“that the individual is supported throughout the process.”

In my opinion, the title used by the Daily Mail: “Freemasons break tradition as they allow women to join the brotherhood (but only if they were born male)”  is also deliberately misleading.

Let’s not forget that a solar cult like Freemasonry cannot become a lunar one because of a sex change or political correctness, as it will completely lose its original identity and create many problems, even in the present rituals adopted for initiation by the UGLE. For example, the reason why the left breast is exposed during the first degree initiation is to ensure the candidate is indeed a male, and not a female trying to infiltrate Freemasonry.

With the new Gender Reassignment Policy, such practice will indeed become a problem in the coming months, and will inevitably generate a change within the ritual that could push many Freemasons into leaving the UGLE, or other Obediences that follow this change, considered by many, a unprecedended step towards Masonic irregularity. The Anderson’s Constitutions of 1723 is in fact clear on this point: “The persons admitted Members of a Lodge must be good an true Men, free-born, and of mature and discreet Age, no Bondmen no Women, no immoral or scandalous men, but of good Report.”

Remember, that Anderson’s Constitution is the basis of Modern Freemasonry and its foundation of operation. A variety of stories and irregularities exist about its legitimacy and its foundation, yet, it remains an early canon of Masonic History. For some background, this excerpt from wikipedia offers some insight into its history.

Last February, I traveled to London, with my wife, Christy, to attend her initiation into Freemasonry. It was not a regular lodge of course, but 70% of its members were regular Freemasons from the UGLE, working in clandestinity because women are still not accepted in their Obedience. I have always respected this choice, but I completely reject the foolish Gender Reassignment Policy by the UGLE that clearly shows political correctness has gone way too far. I would prefer real women in lodges than this left-wing hypocrisy. Check it out for yourself: https://www.ugle.org.uk/gender-reassignment-policy 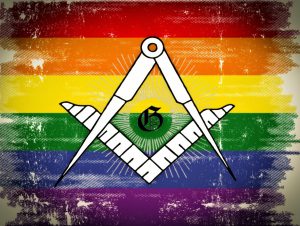 Christy Zagami is the author of Confessions of an Illuminati Princess: