Today was the first official visit by the French president Macron to the Vatican, where the top subjects on their agenda were faith, immigration, and the role of the church in French society.

This geopolitical confrontation over matters of immigration and economy is gradually tearing apart the European Union and clearly demonstrates to the world the blatant reality of this Jesuit-led New World Order.

In regards to international relations, it is quite unprecedented that a French President like Emmanuel Macron would meet the Pope in the heart of Rome, and not his counterpart, the Italian PM Giuseppe Conte. Of course, bilateral strains over the migrant issue are playing an enormous part, as Macron has insulted Italy over and over again since the formation of the its new populist government. Macron, the boy toy of the NWO,  doesn’t care about Italy, as the young French president only really cares about his real boss, Pope Francis.

In fact, by tradition, French heads of state inherit a particular honor, that has been granted for centuries, only to the rulers of France, the title of Honorary Canon of the Basilica of St. John Lateran,  which is the official cathedral of the Pope. This honor continues to be an instrument of manipulation and a subtle form of control exercised over France by the Vatican to this day.

However, Macron, who was once a Jesuit student, has pushed his privileged relationship with the Holy See to a new level of submission, when last April he called for stronger ties between the French state and the Catholic Church, ignoring strong criticism by French secularists for this unprecedented move.

Macron was rightly  accused of undermining French secularism after he told French Catholic leaders that “Relations between Church and State have been damaged”and must be “repaired,”Let’s remember that under a landmark 1905 law, France must observe the strict separation between Church and State, but Macron seems to want to change this law to please the Jesuit Pope.

Macron is also a hypocrite, unlike the Pope,  who invites Italy to accept the massive influx of immigrants, while at the same time closing its own borders in France, just as the Pope does at the Vatican.

With Obama’s presidential term over, Macron has become the new leader of the left-wing globalists who hate Donald J. Trump.Despite the apparent closeness of Trump and Macron, the truth is that the two are pretty much diametrically opposed on almost every major issue, and Trump should consider him to be one of his worst enemies, in my opinion. Macron, who is a New Ager, and some say a closed homosexual leading a double life with a certain Matthieu Gallet, described his own religious beliefs during a chat with journalists by stating “I believe in a form of transcendence, that’s why I thoroughly respect the role of religions in society.” However, when he was asked last year whether he believed in God, Macron gave a rather cryptic answer indicating his faith is in something spiritual and immaterial, but not Catholic in form. That’s because Macron, as a Jesuit agent, is a New Age believer, but also a Satanist, who lives a life of lies and deceipt, a willing candidate for the role of the Antichrist. 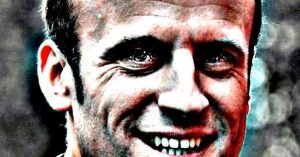