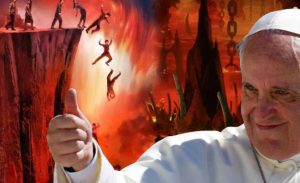 Last week at the Vatican, an attempted impeachment of the Pope for heresy was made by a group of influential cardinals. On Thursday, the group allegedly sent an emissary, a foreign cardinal, to warn the Pope about the imminent threat of impeachment he would face. He was urged to dismiss his public assertions on the non-existence of hell as fake news, by his good friend and collaborator, left wing journalist Eugenio Scalfari, whose sin was to simply use brackets for the first time in his interviews with the Pope.

This shocking news and the risk of impeachment for Pope Francis has been confirmed by Antonio Socci, one of Italy’s leading Catholic journalists and a best-selling author, who is also the director on behalf of RAI, the Italian State owned TV of the advanced School of radiotelevision (RAI) journalism of Perugia.

Socci stated that after the threat by the group of cardinals, who talked through their representative about two possible heresies commited by the Pope that could lead to violation of the Canon Law and his impeachment, Jorge Mario Bergoglio called His Excellency, Giovanni Angelo Becciu, Substitute of the Secretariat of State, now in charge of the Knights of Malta, and a trusted confidant of the Pope, for his advice.

Becciu told Bergoglio to retract these statements immediately, and last Thursday, the Holy See released an official statement on the non-validity of this interview with Scalfari, the third in recent years, whose past interviews where even included in official Vatican publications on the Pope, issued, of course, with Bergoglio’s direct approval, even when deemed controversial, to say the least.

To save the Pope from this growing crisis that is affecting the identity of the Church, even Repubblica, one of Italy’s leading newspapers, founded by the same Eugenio Scalfari, ran an article today, Monday the 2nd of April 2018, by Piergiorgio Odifreddi, stating that everything Scalfari wrote about the Pope, should be dismissed, and can be simply considered Fake News. A final blow to the credibility of Scalfari,  who will probably never interview the Pope again and be blacklisted, after a long career as a Marxist propagandist and a servant of the elite.

In the meantime, the only Fake News that we can fully confirm comes from the Vatican itself, and the recent endorsement of Pope Francis by Pope Ratzinger in a falsified letter that has brought the resignation of Monsignor Dario Edoardo Viganò, Prefect of the Vatican’s Secretariat for Communication, in late March.  The Pope is losing control of the Church, and in a growing fear of schism and possible scandals, he is trying desperately to find external support for his modernization of the Church,  something Ratzinger categorically refused. 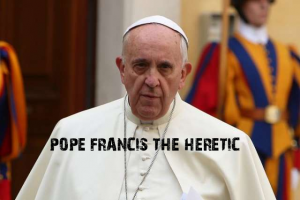 Will the Pope eventually resign or will Bergoglio be impeached?  Discontent in the Vatican grows every day, and signs of an imminent catastrophy seems to be around the corner.  Last Thursday, while the Pope was kissing Muslim feet and pieces of the Basilica of St.Peter’s were falling to the ground,  an Australian magistrate closed a month long court hearing of evidence on whether the most senior Vatican cleric ever charged in the Catholic Church sex abuse crisis will stand trial.

Yes, we are also at the final stages of Cardinal’s Pell case, and Belinda Wallington told the Melbourne Magistrates Court she will finally make her decision after lawyers make their final submissions on April 17, to decide if prosecutors have a strong enough case against Australia’s highest-ranking Catholic, Cardinal George Pell, to warrant a trial by jury. Something the Vatican his trying to desperately avoid.