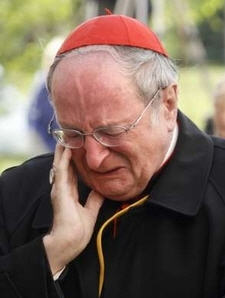 As the tension rises in the Vatican, we may have the first victim of the internal conflict against the pedophile network, that now rules the Church with Pope Francis. His name his Cardinal Joachim Meisner, the former Archbishop of Cologne, a strong defender of the Church’s doctrine and orthodoxy, who suddenly died at the age of 83, on the 5th of July 2017. He was considered a leader of the conservative wing of the German episcopate, and was one of the four cardinals who orginally presented the controversial letter “Dubia” to Pope Francis in September 2016, seeking up until June 2017, a clarification on the modernization of the Church in matters of faith, and the infamous Post-Synodal Apostolic Exhortation issued by Pope Francis called, Amoris Laetitia, without ever receiving an answer.

In an interview given on the 5th of July by Cardinal Gerhard Ludwig Müller, now ex-Prefect of the Congregation for the Doctrine of the Faith, Müller said he spoke with Cardinal Meisner the night before he died. As the Passauer Neue Presse reports:

Müller had spoken over the phone with the former Archbishop of Cologne [Cardinal Meisner] the previous night [before he died the next morning]; and they also had spoken about the non-renewal of his former position. Meisner had shown himself to be “deeply saddened” by this dismissal. “That moved him personally and wounded him – and he considered it to be a form of damage for the Church,” as the Curial Cardinal [Müller] himself described the reaction of Meisner and l well-informed sources within the Vatican say that perhaps Cardinal Meisner “died of a broken heart.” Or was he killed in traditional Vatican fashion with a poison coffee?

In this new interview Cardinal Müller also commented and sharply criticized the conduct of Pope Francis with regard to his dismissal from the CDF, but it was the phone call with Cardinal Meisner, and his sadness for what happened to Müller after the Jesuit take over of the CDF, that seems pretty suspicious to me and other Vatican analysts. Interestingly enough, Archbishop Georg Gänswein, personal secretary of Pope Emeritus Benedict XVI, and Prefect of the Papal Household very close to Pope Francis, and Obama, and a member of the Congregation for the Doctrine of the Faith since 1996, also happened to meet Cardinal Meisner shortly before his death. Only a coincidence? Of course not, nothing is a coincidence in the Vatican, but a well orchestrated maneuver.

According to the Passauer Neue Presse, Gänswein visited Bad Füssing (near Passau), on the 2nd of July, in order to give a talk at the “Bad Füssinger Gespräche” [Bad Füssing Talks]. Cardinal Meisner had been staying in Bad Füssing for a period of time for vacation, as his health was not considered at all a problem. So the two influential Vatican figures met in person there, but unfortunately, no details have been revealed about their conversation that eventually led to Joachim Meisner’s death, a mystery that needs further investigation, as it seems Pope Francis is clearing up the scene from any unwanted opposition before his summer vacation, and Meisner was on his hit list for a long time.