Are we to believe the Earth, and to an extent that the Moon, would both collapse? Perhaps this is a metaphor, or a description of some kind of new physical reality? The “days of universal madness” could refer to the imbalance of the planets, while the “crying Sun” could suggest an intense radioactive solar-rain that will lead to the overheating of the atmosphere, and would increase aridity upon Earth. The passage describing “… the ground of Rome shall move as the wave of the sea,” could refer to violent earthquakes that would be produced, and that could even sink the Eternal City, followed by, “And the sea will come to Rome …”
The outcome of this chain of catastrophic events predicted by the Apocalypse of Ephesus would be a complete reshaping of our planet, which perhaps will spin through a different orbit, or experience a pole shift where continents rise and fall. cit. p. 155.

Renzo Baschera, the “Prophecy Hunter” we encountered earlier, writes in reference to the prophecies of Saint John Bosco: “Rome, like Paris, will be destroyed. At this point, dozens of prophecies seem to agree. Destruction of the city of Rome, however, will not be so sudden and immediate. There will be certain ‘signs’ first. In fact, it is written: I will come to you four times. ‘The first’ sign will be given by an earthquake (but it will be a series of mini-earthquakes, which ‘will run rampant on the Roman hills, as runaway goats’).” p. 175.

Also bear in mind that within this context are the growing tensions at a geopolitical level, described clearly by Pope Francis since the summer of 2014, and suggesting that the Third World War has already begun, with the possible Islamization of the Vatican hierarchy. This all seems to fit in with the words of the New Testament from Matthew 24: “For many will come in my name, claiming, ‘I am the Messiah,’ and will deceive many. You will hear of wars and rumors of wars, but see to it that you are not alarmed. Such things must happen, but the end is still to come. Nation will rise against nation, and kingdom against kingdom. There will be famines and earthquakes in various places.” It is hard not to wake up every morning and see history repeating itself. After one hundred years since World War I, many nations seem to be on the brink of the biggest conflict in history, with the stakes higher than ever before. p. 212.

The author and Alex Jones with the book Pope Francis: The Last Pope? 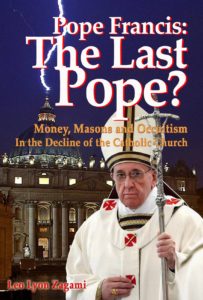 Cover of the book