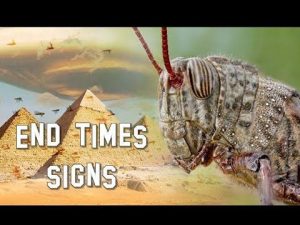 The locust plague that has reached the four corners of earth may indeed be the “fifth trumpet” prophesied in the Book of Revelation, or at least a sign of the End Times. In the final book of the New Testament, seven trumpets are sounded, one at a time, to cue apocalyptic events seen by John of Patmos in his prophetic visions of the End Times.

According to Revelation 8:1-2, the angels sound these trumpets after the breaking of the Seventh Seal, which secured the scroll of the apocalypse, marking the Second Coming of Christ. The fifth of these seven trumpets are said to see a swarm of locusts sent to torment anyone who does not have the approval of God. They are unpredictable. There is no real warning. But when they invade, they descend as an army of billions.

In the last few months, horrifying video footage shows large swarms of locusts filling the skies of China, Africa, India, and of now, South America. So how long before they arrive to the United States?  Only two months ago, Argentina and Brazil issued warnings as a 9-square-mile of locusts entered Argentina from Paraguay as it headed in Uruguay’s direction. Of course, there can be a lot of confusion about what exactly a locust is, and the libtards will always blame them on climate change. To the average eye, it’s easy to mix locusts up with cicadas or crickets.  Rick Overson, of Arizona State University’s Global Locust Initiative, says that locusts are a very special kind of grasshopper, explaining, there are hundreds of species of grasshoppers, “but only a small handful of those are what we consider locusts.”

According to Overson, it comes down to a superpower possessed by locusts that enables them to go through a remarkable switch in development. Most of the time, locusts exist in their “grasshopper phase” — they lead solitary lives, they’re green and pretty and unremarkable.”Nobody really notices them,” Overson says.

The timing of this varies, and the shifts are pretty irregular, but for years, locusts can live like alone, biding their time, but when environmental conditions are right — usually when there’s a lot of rainfall and moisture — something dramatic happens: “They increase in numbers, and as they do so, they sense one another around them,” says Overson. This is what biologists call the “gregarious phase”of the locust. The creatures undergo a remarkable transformation. “They change their physiology. Their brain changes, their coloration changes, their body size changes,” Overson says. “Instead of repelling one another, they become attracted to one another — and if those conditions persist in the environment, they start to march together in coordinated formations across the landscape.”

Titanic swarms of desert locusts resembling dark storm clouds are already descending ravenously on the Horn of Africa as the battle against the locust “invasion” in Southwest China’s Yunnan Province is still underway, in hope that the plague of insects can be brought under control.  However, the American scholar Edward Payson Evans once pointed out the diabolic nature of certain insects: “Devils in the forms of gnats and tiny insects were thought to be especially dangerous, since one might swallow them unawares and thus become diabolically possessed.” At present, locusts are roving through croplands and flattening farms all over the world in a devastating unprecedented threat to food security.

Yesterday, while Joe Biden was telling Americans that they “aren’t safe” under President Trump due to climate change, he was under visible attack by locusts that can be seen on camera, demonstrating once again he does not have the approval of God and he also does not have a clue to what is really going on around him. At least two locusts walked along his shoulder and then on his neck, so he immediately played the “climate change” card while brushing off the bug as all libtards do to justify the visible problem. We all know, 2020 has been a hellish year, with World War 3 fears, the fires, first in Australia and now in the United States, the infamous coronavirus plandemic, and now the locust invasion. Could this be a warning from the heavens?  Keith Cressman, a senior locust expert at FAO warns that the current outbreak could become a full-scale plague should the weather keep working in the locusts’ favor. Such a scenario could have devastating consequences for the entire world. Locusts are migratory, transboundary pests. They are powerful, long-distance flyers, so they can easily go a hundred plus kilometers in a 24 hour period and they can easily move across countries in a matter of days.

For U.S. agriculture, the memory of locust clouds have long faded, but the speed, ferocity, and devastation of locusts, particularly the Rocky Mountain locust, would have once been a fact of life for a sweep of American farmers from California to Texas to Minnesota. The density of Rocky Mountain locust swarms that periodically hit U.S. crop fields during the 1800s is difficult to grasp today. Western settler accounts testify to locust clouds “blocking out the sun.” Laura Ingalls Wilder wrote: “The cloud was hailing grasshoppers. The cloud was grasshoppers. Their bodies hid the sun and made darkness. Their thin, large wings gleamed and glittered. The rasping whirring of their wings filled the whole air and they hit the ground and the house with the noise of a hailstorm.”

Within a short span of hours, locust swarms could blow in and devour everything a farmer has — total consumption of: crops, fabric, or clothing. Farmers tried in vain to fight the swarms with fires and metal scoops covered with tar or molasses, and were met with destruction on a catastrophic scale as Wild West Magazine details: “The locusts soon scoured the fields of crops, the trees of leaves, every blade of grass, the wool from sheep, the harnesses  from horses, the paint off of wagons and the handles off of pitchforks …”  The locusts, farmers grimly quipped, “ate everything but the mortgage.”In 1875, the largest locust swarm in history was recorded over the Midwest — 198,000 square miles. (For a size reference, California covers 163,696 square miles.) The 1875 swarm was estimated to contain several trillion locusts and probably weighed several million tons.That was the largest locust cloud in world history, according to Jeffrey Lockwood, author of “The Devastating Rise and Mysterious Disappearance of the Insect that Shaped the American Frontier.”

Google trends reveal that since news of the locust attacks broke, people have been looking up Biblical passages as the event occurs to understand what the Bible book says.The Old Testament also mentions locusts in several parts, and a glance at passages will show that the bugs have always been associated with destruction and devastation. In most cases, locusts were the weapons of God, who used it to punish mankind. For example, in the Book of Exodus, the Pharoah of Egypt refused to free the Israelites who had been enslaved, and as punishment, the countrymen faced the wrath of God.

Here’s how the story goes: Enraged, God inflicted ten plagues upon Egypt – water turns to blood, lice, locusts, flies, darkness, boils, livestock pestilence, frogs, hail, and the death of firstborn children. Even before Moses, the intervention of a variety of gods with insects in human affairs was common and essentially fell into two categories. First, gods punish people with insects for bad behavior. Second, gods are prayed upon to reduce insect problems. In Chinese mythology, for example, different hells exist to punish sinners for different sins and one of the punishments is being devoured by locusts. Across the world, in the pre-Columbian mythology of the Toltecs of Mexico, it is reported that their King, Huemac the Wicked, disgusted the gods so much that the people were troubled for six years with various plagues, including cloud-like swarms of locusts.