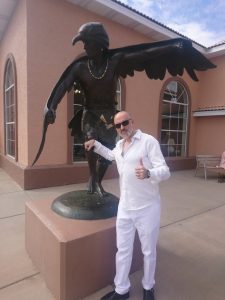 In the summer of 1958, a minister named David Young, who happens to be a distant relative of mine, was driving across the Four Corners region of the U.S., a bit like I have been doing myself in the past few weeks, when he picked up an old Hopi man named White Feather that he found standing by the side of the road.  Hopi is a shortened form of the original term “Hopituh-Shi-nu-mu” for which the most common meaning given is “peaceful people.”

The Hopi reservation that I recently visited while traveling back from Texas to California, is almost 2.5 million acres in size and located in stunning northeastern Arizona near the Four Corners area just east of the legendary Grand Canyon, and is surrounded completely by the Navajo reservation.  For this reason, I spent the night on Navajo Boulevard in Holbrook, during my brief stay in this beautiful area of the United States that I regard as spiritually special.

The Hopis inhabit 14 villages, most of which are situated atop three rocky mesas (called First Mesa, Second Mesa, and Third Mesa) that rise 600 feet from the desert floor. The Hopi Nation had 7,360 members in the 1990 census, and about 1,000 lived on reservations. They are considered an ancient tribe, having lived continuously in the same place for a thousand years. They are a deeply religious people, whose customs and yearlong calendar of constant ritual ceremonialism guide virtually every aspect of their lives. I am fascinated by their devotion and their spiritual stand in an Indian world increasingly corrupted by greed and matter, especially since the birth of the government program to help American-Indian tribes become more self-sufficient by allowing them to run casino gambling, as codified by the Indian Gaming Regulatory Act of 1988.

According to Suzanne and Jake Page’s book Hopi , the Hopis are called “The oldest of the people” by other Native Americans and Frank Waters wrote in The Book of the Hopi, that the Hopis “Regard themselves as the first inhabitants of America.”  Keeping this in mind it is very important to understand the importance of David Young’s encounter in 1958.

This spiritual elder of the Bear Clan, who is said to be the most sacred of all the Hopi clans, confessed to him that all his sons were dead and that the Hopi ceremonial cycle was slowly becoming extinct. After sensing that Reverend Young, a man of God, was trustworthy of his revelations, he decided to pass along nine primary Hopi prophecies that together would herald the destruction of the Fourth World.

As described in Frank Walter book  from 1963 entitled Book of the Hopi, the account begins by describing how, while driving along a desert highway one hot day in the summer of 1958, a minister named David Young stopped to offer a ride to an Indian elder, who accepted with a nod. After riding in silence for several minutes, the Indian told him:

I am White Feather, a Hopi of the ancient Bear Clan. In my long life I have traveled through this land, seeking out my brothers, and learning from them many things filled with wisdom. I have followed the sacred paths of my people, who inhabit the forests and many lakes in the east, the land of ice and long nights in the north, and the places of holy altars of stone built many years ago by my brothers’ fathers in the south. From all these I have heard the stories of the past, and the prophecies of the future. Today, many of the prophecies have turned to stories, and few are left — the past grows longer, and the future grows shorter.

And now White Feather is dying. His sons have all joined his ancestors, and soon he too shall be with them. But there is no one left, no one to recite and pass on the ancient wisdom. My people have tired of the old ways — the great ceremonies that tell of our origins, of our emergence into the Fourth World, are almost all abandoned, forgotten, yet even this has been foretold.

My people await Pahana, the lost White Brother [from the stars], as do all our brothers in the land.He will not be like the white men we know now, who are cruel and greedy. We were told of their coming long ago. But still we await Pahana.

He will bring with him the symbols, and the missing piece of that sacred tablet now kept by the elders, given to him when he left, that shall identify him as our True White Brother.

The Fourth World shall end soon, and the Fifth World will begin. This the elders everywhere know. The Signs over many years have been fulfilled, and so few are left.

This is the First Sign: We are told of the coming of the white-skinned men, like Pahana, but not living like Pahana — men who took the land that was not theirs. And men who struck their enemies with thunder. [First sign of guns.]

This is the Second Sign: Our lands will see the coming of spinning wheels filled with voices. In his youth, my father saw this prophecy come true with his eyes — [the white men bringing their families in wagons across the prairies.]

This is the Third Sign: A strange beast like a buffalo but with great long horns will overrun the land in large numbers. These White Feather saw with his eyes –[the coming of the white men’s cattle.]

This is the Fourth Sign: The land will be crossed by snakes of iron.[Railroad tracks]

This is the Fifth Sign: The land shall be crisscrossed by a giant spider’s web. [Electric power and telephone lines]

This is the Sixth Sign: The land shall be crisscrossed with rivers of stone that make pictures in the sun. [Highways and their mirage-producing effects]

This is the Seventh Sign: You will hear of the sea turning black, and many living things dying because of it. [Oil spills in the ocean]

This is the Eighth Sign: You will see many youth who wear their hair long like my people, come and join the tribal nations, to learn their ways and wisdom. [“Hippie Movement” of the 1960s]

And this is the Ninth and Last Sign: You will hear of a dwelling-place in the heavens, above the earth, that shall fall with a great crash. It will appear as a blue star. Very soon after this, the ceremonies of my people will cease. [The Ninth Sign was the U.S. Space Station Skylab, which fell to Earth in 1979. According to Australian eye-witnesses, it appeared to be burning blue.]

These are the Signs that great destruction is coming. The world shall rock to and fro. The white man will battle against other people in other lands — with those who possessed the first light of wisdom [Israel?]. There will be many columns of smoke and fire such as White Feather has seen the white man make in the deserts not far from here. [Atomic Bomb] Only those who come will cause disease and a great dying. Many of my people, understanding the prophecies, shall be safe. Those who stay and live in the places of my people also shall be safe. Then there will be much to rebuild. And soon — very soon afterward — Pahana will return. He shall bring with him the dawn of the Fifth World. He shall plant the seeds of his wisdom in their hearts. Even now the seeds are being planted. These shall smooth the way to the Emergence into the Fifth World. But White Feather shall not see it. I am old and dying. Perhaps you will see it. In time, in time….’

The old Indian fell silent. They had arrived at his destination, and Reverend David Young stopped to let him out of the car. They never met again. Reverend Young died in 1976, so he did not live to see the further fulfillment of this remarkable prophecy.

Being there and honoring White Feather after this historic Fourth Of July Speech given by our president Donald J. Trump was no coincidence. We are gaining momentum in our Spiritual War against the enemies of humanity.

Don’t miss another exciting date on Zagami’s Book Tour for July 16, 2019 at the Patio Gallery room at the Spring’s Preserve in Las Vegas. The Springs will have the rooms opening from 5:30 pm and the event will start at 6pm!

To reserve your place and for more enquiries: [email protected]