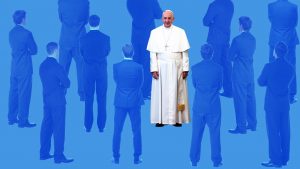 Pope Francis “new” church mandatory abuse reporting law for clergy announced a few days ago is amazingly hypocritical. It basically requires that the church report abuse only to itself, but that has been the problem all along.

What is different today because of this law from yesterday, a month ago, ten years ago or twenty years ago? Basically nothing! The Vatican is simply formalizing under church law the existing problem and presenting it as a supposed solution.

In the meantime, at a meeting of the Pontifical Academy  Pope Francis (shown in white) advocated the policies of the New World Order for decreased national sovereignty and increased global unity. “A shift toward globalism is necessary,”he said, “in order to fight climate change and other worldwide threats.”

“When a supranational common good is clearly identified, it is necessary to have a special authority legally and concordantly constituted capable of facilitating its implementation. We think of the great contemporary challenges of climate change, new forms of slavery and peace,” Pope Francis told those gathered at the Conference,“Nation, State, and Nation-State.”

Pope Francis is the leader of this Jesuit conspiracy that ignores the victims of pedophilia and shamelessly promotes progressive ideas that have nothing to do with Christianity demonstrating instead is position as Supreme leader of the New World Order.

This is a statement made after Bergolio’s last moves  a couple of days ago by #Ending Clergy Abuse (ECA),  a global network of survivors of clergy abuse, activists and organizations from 29 countries:

“Today, Pope Francis issued a new church law which appears to be designed to make no significant or meaningful change in how bishops and the Vatican deal with cases of child sex crimes by priests, will leave potentially thousands of known abusers in ministry, and will have no consequences for bishops who cover up for abusers or do not report sex crimes by clergy to civil authorities.

First, there will continue to be no mandatory reporting requirements of sex abuse to civil authorities by priests and bishops and no penalties for failing to do so. When challenged on why priests are not mandated to report abuse the Vatican often claims that mandatory reporting cannot be done in certain countries. If this is the case, the Vatican needs to identify which countries this would entail and why an exemption from reporting is necessary in that country. This does not apply to the vast majority of countries around the world where there are absolutely no obstacles to reporting child abuse. The church should establish the law for reporting and justify the exception. Instead, they are using the exception as a pretext for not reporting sexual abuse to civil authorities and to keep abuse secret.

Second, the process of reporting, investigating and determining a case remains entirely secret and in-house with the local bishop, who will remain in complete control of the investigative process and all the information. The new law allows a bishop to involve competent lay people and others, but it does not require a bishop to do this. Most of them will not. Many bishops around the world, especially in Africa, Asia, and parts of Latin America are extremely resistant to any form of transparency that would compromise their absolute authority and power over the priests of their diocese or threatens the secrecy in which a bishop handles sex abuse reports. And it goes without saying that there are absolutely no consequences in this law for bishops who cover-up these crimes.

Third, and maybe most significantly, nothing in the document establishes or enacts zero tolerance for sexual abuse by priests. Bishops around the world have abusers in ministry or have put them back into ministry even when they are found guilty. There is nothing in this new law that forbids them from continuing to do so. Even in the Vatican state, where Francis has complete and total authority, there is no true zero tolerance. In the Vatican state, a victim has until the age of 35 to report the crime to the church, when most victims take longer than that to do so.

What Pope Francis needed to issue today–and he has had six years to do it–was a universal church zero tolerance law for child sex abuse. The law must state clearly that any priest who has committed even one act of child sexual abuse at any time will be permanently removed from the priesthood. Then there must be a new law for zero tolerance for any bishop or church official who has been found to cover-up these crimes. He too must be removed from the clerical state.”